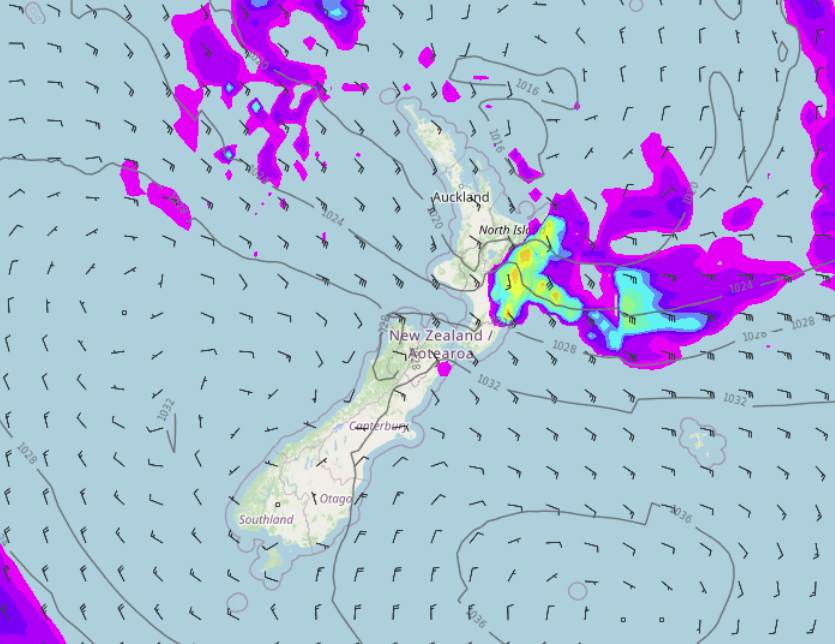 A southeasterly airflow continues to flow over the North Island today bringing more rain in the east, mainly dry out west. The South Island is fairly settled and dry with high pressure.

Northland, Auckland, Waikato & Bay Of Plenty
Mostly cloudy although some sun may break through in the afternoon, a few early spits or showers about the Coromandel and Northland clear then returning in the evening. Breezy southeasterlies.
Highs: 19-22

Western North Island (including Central North Island)
Mostly cloudy, afternoon sun may break through, more so nearer coastal areas. Showers may spill over at times from the east into the Central Plateau. Breezy southeasterlies, strong at times about the coast.
Highs: 12-18

Eastern North Island
Rain, heavy falls possible at times then starting to ease from afternoon. Wairarapa may be dry in the morning then showers move in after midday. Fresh southeasterlies.
Highs: 13-16

Wellington
Mostly cloudy, mainly dry but there may be a brief shower at times. Fresh southeasterlies.
Highs: 13-15

Marlborough & Nelson
Mostly cloudy for Marlborough with any drizzle clearing in the morning, afternoon sun may break through, fresh southeasterly winds. Nelson is mostly sunny and warmer with some high cloud, lighter southeasterlies.
Highs: 13-18

Canterbury
Mostly sunny, some cloud Banks Peninsula northwards in the morning then breaking to sun. East to northeasterly winds a little breezy in the afternoon across the plains.
Highs: 13-20

Southland & Otago
Sunny, a touch of high cloud possible from afternoon. Light winds for most, northeasterlies for coastal Otago.
Highs: 16-22