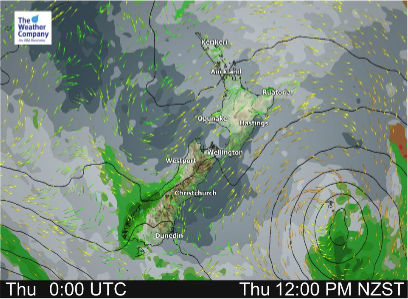 Most North Island regions are dry but there is the odd clearing shower this morning and East Cape may see isolated showers this afternoon. Showers for the West Coast of the South Island, drier in general out east.

Temperatures in the late teens or early twenties for most but in the mid teens for parts of the far south, West Coast and about the Central Plateau. Winds are light to moderate for most but a bit breezy from the north through Cook Strait.

Northland, Auckland, Waikato & Bay Of Plenty
There may be a few morning showers (excluding Bay Of Plenty) then sunny spells increase, west to southwesterly winds ease dying out in the evening. Afternoon northerlies for eastern Bay Of Plenty.
Highs: 21-23

Western North Island (including Central North Island)
Morning cloud, may be a shower then sunny spells increase. Light winds tend to the west in the afternoon.
Highs: 16-20

Eastern North Island
Morning cloud, risk of a shower then sunny areas increase. About the ranges behind Gisborne and northern Hawkes Bay there could be a few isolated afternoon showers for a time. Light southwesterlies tend to the east after midday.
Highs: 20-21

Marlborough & Nelson
Morning cloud breaks then mostly sunny, there could even be a drizzle patch or shower at first then drying out, more so for Nelson and about the Marlborough Sounds. Afternoon north to northeasterly winds.
Highs: 19-21

Canterbury
Sunny with high cloud starting to move in mid to late afternoon, east to northeast winds pick up after midday across the plains. Winds stay northwest further inland.
Highs: 19-20

West Coast
Partly cloudy skies, showers for Fiordland spread northwards to about Greymouth in the afternoon. Rain for Fiordland in the evening. Northerly winds.
Highs: 15-19