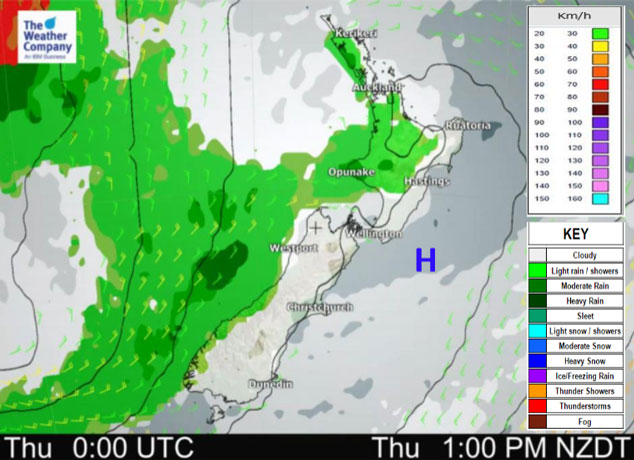 A large anticyclone sits on / to the east of New Zealand today then we have a small area of low pressure to the west which brings areas of rain or showers to western parts of the country. A few scattered falls may eventually spread eastwards.

Western North Island (including Central North Island)
Mostly cloudy, risk of a shower. Showers picking up in the afternoon then clearing away at night. Light northerlies.
Highs: 16-19

Marlborough & Nelson
Thickening high cloud, some scattered rain for Nelson in the afternoon, clearing away in the evening. Marlborough is looking to be drier however a few spots of rain are still likely after midday spreading from the west. Light winds.
Highs: 16-18

Canterbury
Mostly cloudy, a chance of fog first thing. Scattered rain spreads from the west during the afternoon then clearing later in the evening. East to northeasterly winds.
Highs: 14-16

West Coast
Cloudy with rain developing in the morning, chance of the odd heavy fall from afternoon. Northeasterly winds.
Highs: 16-18