Home > News > The science behind lightning, how it wor...

The science behind lightning, how it works 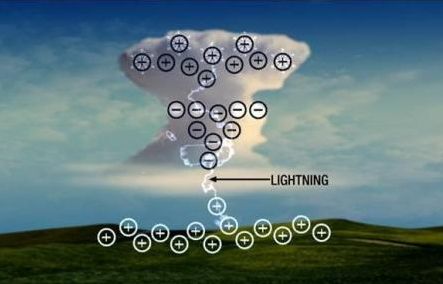 If you’ve ever scuffed your socks on carpeting on a dry day and touched metal, or “shocked” someone unexpectedly, you’ve experienced a discharge of static electricity.

Similarly, the most prominent theory of lightning generation is based on collisions between ice crystals and small hail (or graupel) in the mid-levels of a developing thunderstorm.

This increasingly negative charge in the lower half of the thunderstorm in turn induces, or forces, positive charge to increase along the ground (and anything attached to the ground).

In the world of electricity, opposites attract. Eventually the negative and positive charges build up to the point the air between them can’t insulate them from each other, leading to the lightning discharge.

A couple of caveats here. First, this is how most cloud-to-ground lightning strikes occur. However, roughly 80% of lightning actually occurs within the cloud, never reaching the ground.

Also, this isn’t how all cloud-to-ground lightning takes place. A small fraction of lightning cloud-to-ground flashes occur almost 25kms away from a thunderstorm’s precipitation core, due to positive charge buildup in the storm’s anvil (remember those ice crystals?). These so-called “bolts from the blue” typically contain higher currents than the more ordinary lightning and, therefore, are believed to be responsible for a disproportionate number of forest fires and power line damage.

– From our friends at Weather.com

Depending on how you see it, I am privileged (as a self-professed Thunderstorm fanatic) to live in one of the world capitals for lightning strikes, Singapore… The power of nature really makes itself known here on a frequent basis, the storms are just staggering in size and energy… Awesome stuff… 🙂

LOL, now I know why my youngest experienced bangs and shocks at times, when I touched him. I sometimes experience visible flashes and crackling when removing clothes. 🙂

Just thinking the other day about how we haven’t seen/heard thunderstorms over Canterbury for ages, nothing like the one we had in 09 or one we had in about 03 when the thunder was almost deafening….What is the best time of year for thunderstorms in Canterbury, and do they come with a southerly, or what wind? Also does wind lightning exist? (static electricity???

It has been a long time since Canterbury had a significant thunderstorm (away from the alps and foothills).

Christchurch averages less than 3 thunderstorms a year and spring and summer tend to bring them to the province, particularly late November and early December.

Often a nor’ east wind is required initially then combined with the meeting of colder air from the south, it can cause some significant disturbances.