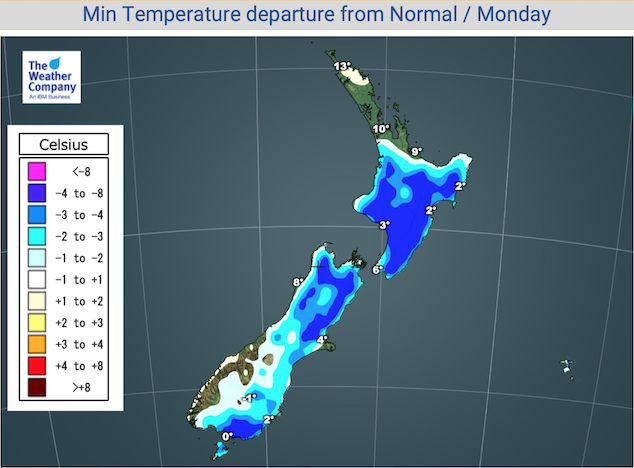 Despite a northeasterly airflow starting to pick up some pace over the country tonight skies are still clear and stable enough for a large portion of land to get below freezing. This is especially true south of about the Central North Island. Most of the South Island gets below zero also however eastern and western coastal fringe areas have just enough cloud and or wind to keep things diving below 0.

As the air flow comes from the sub tropics tomorrow temperatures around New Zealand are a little warmer than what would normally be expected at this time of year. Although technically true that statement above could feel a little misleading for some as cloud cover, rain or showers and wind chill may make people question if that is right.

The few areas with the best combination of weather I would say would be Manawatu in the North Island and Southland for the South Island. These zones will be sheltered from the northeasterly breeze, they will be dry and you can only expect some high cloud. The Manawatu is the top pick of the two due to the warmer temperatures expected. The reverse is often the case when we have southwesterly conditions, Tasman Bay and Bay Of Plenty get the best weather in those instances.

We have a smattering of 16 degree highs across the North Island tomorrow, once again Manawatu or Palmerston North to be more exact has the pick regarding those highs. The coldest day time high will likely be Christchurch on 12 degrees, with its propensity for an easterly airflow no one will escape its chill. Today we actually only have 11 in Christchurch but at least we have the sun, it does help lift the mood.