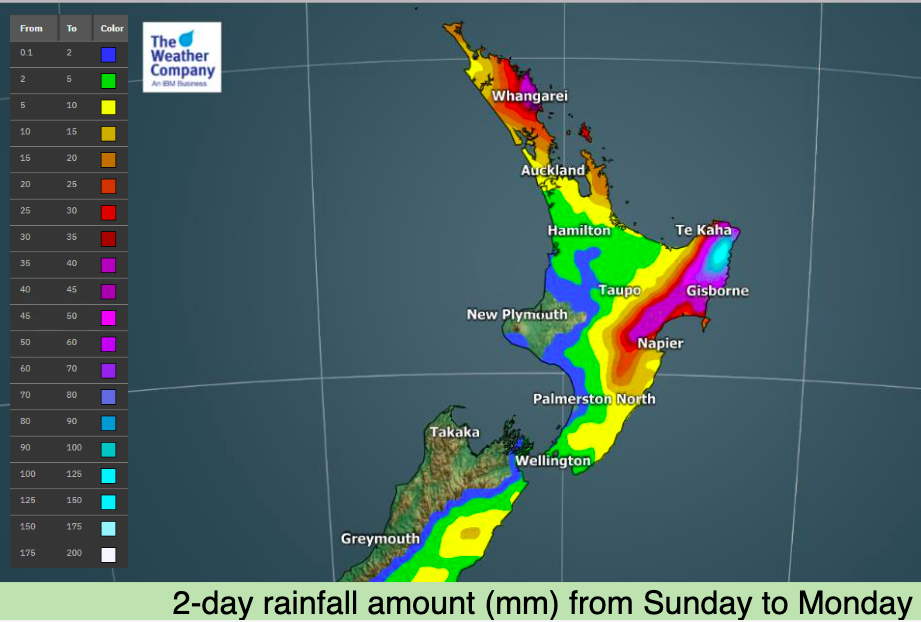 A deepening low with plenty of sub-tropical connections is about to bring a week of windy, sometimes wet, weather to the top of the country.

Despite the long period of unsettled weather for the top of New Zealand there is some good news – dry eastern regions, including Hawke’s Bay, will get some wet weather.

But winds from the south east (mostly) will increase today with gales in some exposed places. Damaging gales are possible on Great Barrier Island today with gusts over 100km/h. Gusts up to 100km/h are possible in eastern Northland too.

Rain accumulations will be highest in East Cape north of Gisborne, and to some degree eastern Northland, around the Bay of Islands over the next two days. More rain is possible in the week ahead too.

However many places south of the upper and eastern North Island won’t be so affected, with lighter winds thanks to high pressure in the South Island. There’s also a surge of colder air from the Southern Ocean about to move in to some regions, so frosts are possible tonight in the south – and even more likely tomorrow night as that more polar air creeps in.

Marine conditions in the top of the country are also deteriorating today with offshore waves reaching over 10 metres in the days ahead, bringing dangerous beach conditions to the east and north of the North Island.

For more details – see your LOCAL HOURLY forecasts at WeatherWatch.co.nz and RuralWeather.co.nz.