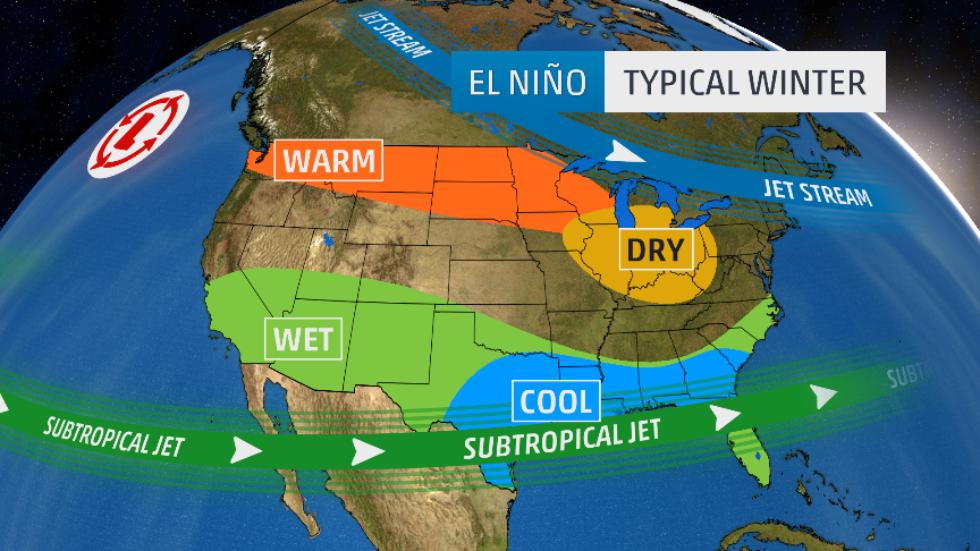 The strongest El NiÃ±o in 18 years continues to intensify and is likely to be one of the three strongest on record by the time it peaks this winter, according to a monthly outlook from NOAA released Thursday morning.

This El NiÃ±o is then expected to weaken in the spring, disappearing altogether by late spring or early summer 2016, the November El NiÃ±o diagnostic discussion from NOAA’s Climate Prediction Center said.

El NiÃ±o is an anomalous, yet periodic, warming of the central and eastern equatorial Pacific Ocean. For reasons still not well understood, every two to seven years, this patch of ocean warms for six to 18 months.

Precipitation and temperature impacts in the U.S. from a strong El NiÃ±o are typically most noticeable during the colder months, from late fall through winter. We have more on what those impacts are later in this article.

From October into early November, sea-surface temperatures (SSTs) near the equator in the central and eastern Pacific have continued to warm.

Tropical meteorologist Dr. Phil Klotzbach said that is being paced by the warmest sea-surface temperatures over the past 25 years in the equatorial central Pacific Ocean, well south of Hawaii.

For historical purposes, El NiÃ±os, and their opposite La NiÃ±as, are ranked according to a three-month running mean SST anomaly, known as the Oceanic NiÃ±o Index (ONI).

A ‘Sea Change’ in Atmospheric Circulation

Thunderstorms require at least some degree of warm, humid air near the surface, so they’re more numerous and persistent over the western Pacific warm pool, and much less so in the eastern equatorial Pacific.

During an El NiÃ±o, these trade winds weaken, and may at times reverse from west to east. Warmer western Pacific water then slowly sloshes back toward the central, even eastern Pacific Ocean in what’s known as an equatorial-trapped Kelvin wave.

Therefore, the most persistent thunderstorms will shift from the western to the eastern and central Pacific Ocean in an El NiÃ±o.