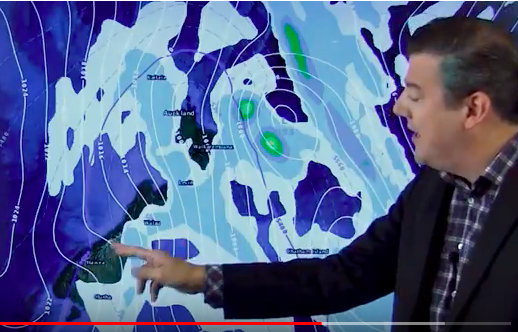 This week is an exceptionally busy weather week around the New Zealand area with a tropical cyclone (Keni) which may bring severe weather to Fiji in the coming day or two but then may merge to create an especially large low pressure system to the east of the country.

The cyclone is not expected to directly hit land but may help alter the weather pattern to the east of the country later this week.

The southerly change this week is significant, caused by a long (north to south) shaped high in the Tasman Sea. As weâ€™ve been saying a lot lately, if this formed in mid-winter weâ€™d be talking about snow to sea level but with it only being April we donâ€™t expect serious snow issues at very low levels. Higher up roads may be closed though over Tuesday and Wednesday when it peaks.

Conditions should start to settle down this weekend with warmer northerlies hopefully back in the picture by Sunday or early next week.