Home > News > Signs of El Nino system detected with so...

Signs of El Nino system detected with some time to go 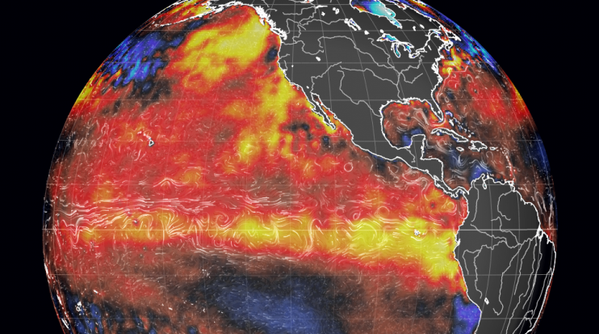 A growing El Nino in the Pacific Ocean looks set to bring dry “spring-like” conditions to New Zealand until early next year – but there is no way of knowing the extent of its impact this far out, forecasters say.

Soil moisture readings in New Zealand show plenty of rain falling in the west and a dry pattern in the east – a sign of the westerly flow that El Nino encourages.

But people need to be “careful” when talking about its effects, he said.

“I don’t support the promotion of dramatic language like, ‘This will be the worst drought since the 90s,’ as we simply can’t know that.

“The long-range forecasts are helpful but they are not the answer as to what is going to happen,” Mr Duncan said.

The concern with El Nino was that it would add to what was an already dry and windy pattern for New Zealand, he said.

An El Nino would mean cooler sea temperatures and more highs in the Tasman Sea, fuelling “spring-like” weather over the country – a possible problem for dry eastern areas such as north Canterbury.

” … time is running out for solid rains in these dry areas,” Mr Duncan said.

Australia’s Bureau of Meteorology said: “All international climate models indicate El Nino is likely to strengthen, and is expected to persist into early 2016.”

What is El Nino?

â€¢ El Nino is a climate pattern associated with unusually warm ocean waters in parts of the Pacific Ocean.

â€¢ An El Nino event can have a significant impact on weather patterns, ocean conditions and fisheries across a large part of the earth.

â€¢ El Nino can also cause heavy rainfall and flooding over Peru, and droughts over Indonesia and Australia.

â€¢ In New Zealand, an El Nino event this year could cause drier “spring-like” conditions.

â€¢ El Nino means “The Little Boy” or “Christ Child” in Spanish. It was first observed in the 1600s by fishermen off the South American coast.

Last year trhe Southern Ocean heated up, and being so prone to weather from the big cold contininent, we got months of low rainfall then drought, heat and very dry air. Pressure was unusually high and persistent last year and it still is.  I reckon that the Southern Ocean has its own form of El Nino, separate to that of the Pacific, and I can’t help but wonder if that also affects the east coast of the South Island drought wise. In the past, when they’ve been hit so have we been. Everytime El Nino breaks, we get intense rainfalls and then major flooding in Paekakariki. That is exactly what happened in April this year, as the Southern Ocean cooled. Now with the Pacific Ocean in El Nino, here we go again. The Southerlies are normally cold and strong in El Nino and that they are at present, as well as being rabid like they were in 2013. The flow is Southerly here and even during forecast SW’s, the Southery is still blowing. To me that means the Southern Ocean is back to normal and in charge, and so is our wind. SW is negative flow for us, La Nina and S/SE is positive or normal. The circulation is reversed here.

The last anticyclone was very high pressure, 1036 is unreal hPa for us. It is crap, because if there is a high by Antartica, we get the high pressure and the inversion from it in Paekakariki, while the rest of the country is still awaiting the Tasman high to arrive. Then it is double the trouble for us. With our weather being so different to other parts of NZ that it can be frustrating at times. Please no more drought, we have had 3 years in a row of it now, with dry spring and summers. It will be crassly unfair to be hit by Sthrn Ocean drought and heat and then to be hit from the other side too. A wet Spring will do and if we have to pay for it insane wind and cold, sobeit, we’re used to that. Loving this winter with a bit more normality from that Sthrn Ocean, but rain totals are down again.