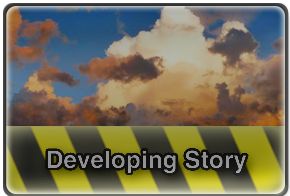 Updated 12:59pm — Lusi remains a “severe tropical cyclone” this afternoon after reaching the predicted category 3 status overnight according to both JTWC and Fiji Met Service.

The storm is now travelling over open waters towards northern New Zealand and will weaken somewhat before making landfall – but it will still retain severe gales and torrential rain as the centre moves in on Saturday PM/very early Sunday AM.

Today Lusi’s winds are sustained at 120km/h with gusts to 150km/h according to JTWC.

Fiji Met Service says Lusi is expected to intensify further today as it moves away from land.

For example one model tracks Lusi’s remains directly down the North Island while another suggests it will slide down the western side of New Zealand – something that doesn’t happen too often.

“This might sound like we’re splitting hairs but the difference between the centre of this low tracking 100kms further west or east can have profound differences to the severe weather over land in New Zealand” says head weather analyst Philip Duncan.

Yesterday New Zealand’s Ministry of Civil Defence & Emergency Management out of Wellington – which operates under Metservice advice – also launched warnings for the nation, saying this cyclone would likely “track over northern New Zealand on Saturday and Sunday and then track southwards over central New Zealand before moving out to sea east of the South Island on Monday” – which mirrors a similar forecast track by WeatherWatch.co.nz.

MetService says Lusi has the potential to be a “significant event”.

WeatherWatch.co.nz maintains that damage is expected for some parts of New Zealand but that forecast needs to be balanced with the fact that larger areas will not be damaged too.

Today Metservice has widened the areas that may be affected by the cyclone and this information can be found in their severe weather outlooks.

The reason for so much uncertainty ahead of a tropical storm, according to WeatherWatch.co.nz, is greatly due to the geography of New Zealand.  “If we were a flat nation it would make this easier to predict” says Mr Duncan.  “The storm would move in and then move away – and the severity would be measured by how close the centre of the low got basically.  But wind and rain would be more even and widespread.  In the case of New Zealand ranges like the Kaimais or Tararuas can dramatically alter wind speeds – and also hold up and hold back rain clouds, producing flooding rains for one region while denying the region right next door of barely a drop”.

Mr Duncan says our geography plays a significant and unique role in weather forecasting in New Zealand.  “A low coming out of the tropics towards the North Island is like ten pin bowling – the ball has been bowled by someone else and it’s our job to forecast which pin it will specifically hit first. Hard to do from a distance and at the last minute it also runs the risk of curving away slightly, which might then significantly change the outcome”.

Tropical storms tend to have a mind of their own – that’s why all forecasters are emphasising that people check back with warnings, watches and forecasts – as nothing is 100% locked in.  We do, however, have high confidence of this low hitting New Zealand – but the exact intensity & tracking of the storm for the three days it will impact New Zealand is still not locked in, especially for central New Zealand.

FLIGHTS
WeatherWatch.co.nz has been inundated with questions about air travel.  The airlines and airports themselves wont make a decision until the time of departure.  And delays would likely be to smaller aircraft.   No one can predict if the weather will be severe enough at the airports to stop flights – that’s a judgment call made by airlines, airports and pilots at the time.  Please check our forecasts, MetService warnings and airline/airport websites.

RISK TO LIFE AND PROPERTY
In today’s New Zealand Herald Philip Duncan is quoted as saying this storm poses a risk to “life and property”.  Is such strong language needed?  Mr Duncan explains why he said it: “Over the past two days dozens of people have contacted WeatherWatch.co.nz asking if they could still go boating in northern New Zealand this weekend. While we love that people are asking about the risks of this storm, it has reportedly already killed a person in Vanuatu and will be producing dangerous conditions for northern New Zealand.

This is not a good weekend to be going tramping in the upper North Island ranges or boating in northern New Zealand.  Follow advice from Civil Defence and stay safe indoors”.

NOT ALL WILL HAVE SEVERE WEATHER / DAMAGE
Again, with relation to the geography of New Zealand, the ranges and mountains of New Zealand will play a huge role at ramping up winds for some or calming them down for others. Likewise rain might be heavy on one side but fairly dry on the other.  The exact tracking of the centre of the low will determine who gets what – and that exact path is still unknown by all forecasters but will certainly become clear over the next two days.

Hi, how hard will Cyclone Lusi hit New Plymouth? And when will it hit its hardest?

Will it hit west auckland?

How hard is it going to hit Whangarei

Hi we were going to be driving to taranaki on Sat at 2pm from Hamilton. But have decided it might be safer to wait till Sunday morning to drive down. Good choice?

Hi there – please see the travel portion of this story for the latest: http://www.weatherwatch.co.nz/content/lusis-track-becoming-clearer

are booked on a AirNZ flight to Vanuatu for a ‘holiday’ @ 1pm on Saturday.

Wife is not a very good flyer.

Hi there – please see the travel portion of this story for the latest: http://www.weatherwatch.co.nz/content/lusis-track-becoming-clearer