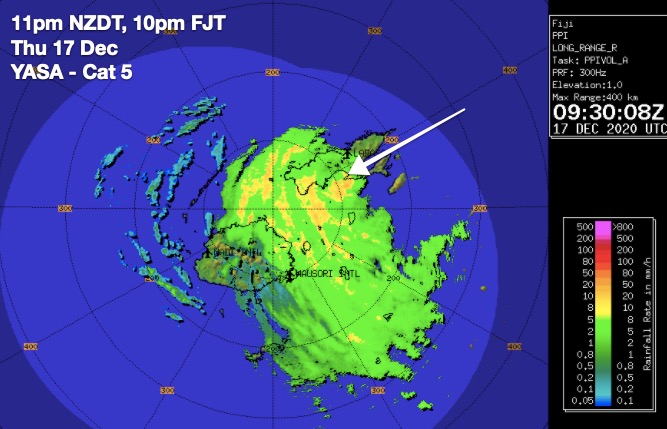 Updated Friday 0:11am NZDT — Powerful and historical Cyclone Yasa has made landfall in Vanua Levu, Fiji and the centre has now exited.

Destructive, life threatening, weather may continue across the Fiji islands for the next 24 hours, but the eye of Yasa has now moved south east out of Vanua Levu.

While still a major Category 5 cyclone WeatherWatch.co.nz says there are some small signs of weakening with the eyewall partially collapsing, plus the storm is moving swiftly across Vanua Levu with it clearing early overnight. This is a positive. While this major cyclone is destructive and deadly the less amount of time it spends over land the better. It will be moving out away from the two main islands over the next several hours.

However the cyclone will now be moving into the smaller islands further south, south east and east of Suva.

YASA remains a Category 5 Severe Tropical Cyclone and brings life threatening and destructive weather conditions. Follow the advice of local authorities anywhere in the Fiji island group – the entire nation is exposed to severe weather from Cyclone Yasa – in some areas to the south until Saturday morning.

Air pressure peaked this morning at 899hPa (hectopascals). It has now lifted a little to 907hPa. This is *incredibly* low air pressure and the 899 reading places Yasa in the history books for the Australia/Pacific region.

The lower the air pressure the stronger the winds get and the higher the storm surge is, generally speaking. The slight change from 899hPa to 907hPa will make very little difference overall but is perhaps a sign the storm has peaked in intensity with the Fiji islands now disrupting the flow.

This remains a major event for Fiji.

Sea surface temperatures are 28/29 degrees Celsius in the area with La Nina fuelling this storm.

Average winds have reduced a little from 260km/h this morning to 240km/h now. Still, this remains a powerful Category 5 cyclone.

Rain radar from the Fiji MetService did show the cyclone clearly moving in but, as expected, radar has now gone down (assuming from power outages) on Vanua Levu.

Intimidating – that is one word to sum up this incredibly early season Category 5 South Pacific Cyclone which is directly aiming for Fiji today and overnight tonight.

Severe Cyclone Yasa is a very powerful cyclone, one of the most powerful on record in the South Pacific and certainly one for the history books – and this is before it’s even reached Fiji properly.

As of 10am NZDT Thursday here were Yasa’s stats:

EXACT TRACKING TONIGHT IN FIJI:
Until the cyclone actually moves in the very precise position of landfall is tricky, but the varying models we trust at WeatherWatch.co.nz and IBM show this storm is on track to likely make landfall on Vanua Levu this evening.

There is also some chance the cyclone could track over the Bligh Waters between Vanua Levu and Viti Levu and not make a technical landfall on either main island.

Either way, this storm is expected to pack a punch. This more eastern track (as earlier this week it looked as though Yasa may be just west of Fiji) exposes many low lying islands south east of Fiji’s main islands to being completely inundated by Yasa’s storm surge.

YASA’S POWER:
This storm has the ability to swamp entire islands, inundate entire coastal communities, wipe some small islands off the map entirely, destroy buildings, bring down trees and cause slips and flooding. The most destructive part of this cyclone will be 150km either side of the centre.

Heavy rain will affect the entire region – and has done so for the past day. 250 – 300mm of rain is possible over the next 2 days.

Huge waves, up to 12 metres, will pound the normally calm northern coastline of both main islands with dangerous seas wrapping around other coastlines.

With Yasa now expected to track further south east this will seriously impact dozens of small islands east of Suva.

GOOD NEWS?
If Yasa does continue to track further east as modelling and Fiji MetService tracking suggests, this could spare western Fiji (Nadi) from the very worst. In saying that, everyone right across Fiji shouldn’t be letting their guard down with a cyclone this enormous and powerful incase it shifts a little from computer modelling.

Yasa is also expected to track faster away from the main islands than originally expected. It may be clearing the two main islands as early as before dawn Friday. However GFS modelling (US) shows it lingering longer over the Bligh Waters and not clearing to the south until Friday daytime.

Very informative and gives us hope this storm will pass. Prayers to the whole of Fiji and to our ❤️ Ones out there.

Fiji, you are in my prayers, God protect you.

God bless you Fiji may you all be safe.

Fiji, you are in my Prayers!!!

My heart goes out to the people of Fiji. After feeling the direct impact of Cyclone Harold earlier this year I know how terrifying a monster storm like this can be. Kia Kaha Fiji.

Hows the cyclone in fiji now