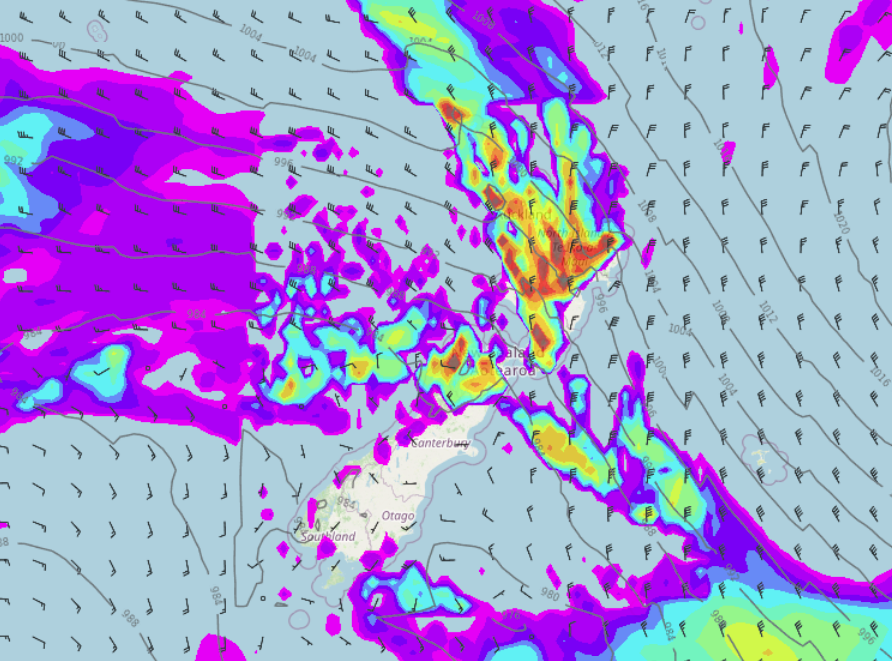 A vigorous front moves over the North Island today bringing heavy rain to some western regions and very strong northerly winds. The top of the South Island still sees some very unsettled weather which should start to ease from afternoon.

Northland, Auckland, Waikato & Bay Of Plenty
Showers, rain in the afternoon with heavy falls possible then easing in the evening as strong northerlies (gale force at time especially about the coast) then change northwest.
Highs: 17-18

Western North Island (including Central North Island)
Rain, heavy in areas especially about Taranaki then elsewhere from afternoon. Strong northerlies, gales about the coast then changing northwest in the evening with rain easing to showers.
Highs: 12-17

Eastern North Island
Cloudy, rain develops about Wairarapa in the morning then spreading northwards during the afternoon. Gust strong northerly winds tend northwest later in the day, conditions clear up at night.
Highs: 17-19

Canterbury
Mostly cloudy with scattered rain, mainly north of about Banks Peninsula. North to northwesterly winds, perhaps tending southwest for a time in the afternoon south of Christchurch along the coast.
Highs: 9-14

West Coast
Rain, there may be a few heavy falls and thunderstorms, more so about North Westland and Buller. Northeasterlies tend to the northwest in the afternoon.
Highs: 11-14

Southland & Otago
Mostly cloudy, some morning rain then clearing. Showers start to push back in from evening.
Highs: 7-12