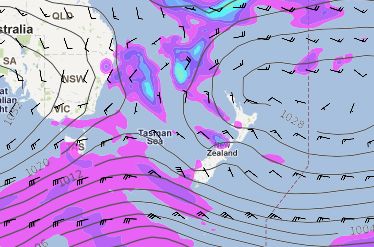 WeatherWatch.co.nz has released their general September forecast and the weather news authority says conditions for the kick off of the Rugby World Cup could be unsettled.

The long range prediction says high air pressure in the north of the country will battle with lows in the Southern Ocean – creating for westerlies to pick up over the month.

For the start of the Rugby World Cup on September 9th the country could be in between anticyclones says WeatherWatch.co.nz.  “While we can’t give a specific weather forecast this far in advance the models are telling us the country will be seeing one high depart to the east while the next high remains well to our west.  That could leave us a little vulnerable for unsettled weather and perhaps a cold front to move in”.

“We usually avoid making specific predictions so far out but we’ve been overwhelmed by the number of people asking about weather for the start of the Rugby World Cup” says Mr Duncan.

WeatherWatch.co.nz predicts warm winds from the northerly quarter with perhaps an incoming rain band around Sept 9 and 10 then a south west change that weekend.

“Clearly this far out things will change somewhat but the overall weather pattern does look unsettled around the middle of September.  We’ll be bringing you the first of more detailed predictions in just a matter of days”.

WeatherWatch.co.nz says despite their “high risk” potential for snow storms until the end of October across New Zealand temperatures look as though they will be fairly average overall for the first two weeks of Spring with westerly winds dominating after a cold change kicks off the month this Thursday and Friday, easing during the coming weekend.

– Homepage image – the map for Sept 9 courtesy of weathermap.co.nz

Hopefully there will be shelter for the patrons of RWC waiting to catch trains, if the weather is to be inclement. Images of herds of people waiting for over 1 hour for trains, flash before my eyes.

Do those westerly bands mean warmer weather for eastern SI? Even if we can’t have games in CHC we’d appreciate some warm spring weather….?!!

Hi there – yes it usually favours warmer, drier, weather for Christchurch.  In fact often in September we start seeing Christchurch reaching the low (sometimes mid!) 20s thanks to the nor’westers.  So hopefully you’ll have a fairly sunny, warm, Sept overall – but there’s that southerly risk the whole time to knock things back a bit!

If it rains throughout Sept won’t the people heading to Dunedins stadium love it.  Watch this space Chch..:-)