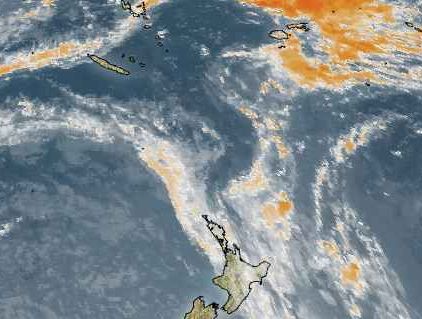 After a calm week since Cyclone Yasi sucked the energy out of the tropics north of New Zealand the weather seems to be re-energising reports WeatherWatch.co.nz.

The Fiji Meteorlogical Service today says while the next two days show no chance of tropical storm development on Saturday there is a 5 to 20% chance of cyclone developing.

While those numbers are low it is the first time since Yasi that the zone north of New Zealand has showed signs of life.

Last week NIWA said that while six named storms had developed this cyclone season we were only half way through with at least another six named storms yet to develop, according to their modelling.

Long range weather maps indicate that over the next 10 days the energy levels north of New Zealand will continue to creep up, meaning that February may end as it started – stormy in the south west Pacific.

WeatherWatch.co.nz says we are now in the peak of the cyclone season and with a strong La Nina boosting sea surface temperatures around us the season may last longer than the usual April end date.

WeatherWatch.co.nz predicts that the next 10 days will be heavily dominated by winds from the easterly quarter over the upper North Island with humidity levels increasing.

We live in the Cook Islands and 3 days ago, we had a stormy night which I believe we can attribute to the TD SE of the Cooks now.

We love your site and love the way you have increased your SW Pacific cyclone coverage – we struggle to get reliable info up here lol.

So far we have been told that while the weather conditions are going to produce more cyclones, those same conditions serve to lower the chances for the Cook Islands. Someone else told me that the Cooks don’t have the stream of warmer water through it this year which encourage the cyclones. I would be interested in your thoughts.

Yes we sure look like having easterlies in the north for a while. That usually results in some weather from the tropics so it will be interesting. The high looks to be incharge for a while though so that may keep the monsters at bay.

Very small tides at the moment as well, usually cyclones arrive at the time of large tides so I would be watching the tide chart

Heya,
So what do you think the weather will be like on the Fri 25Th Feb and that weekend??? I’m getting married outside (garden wedding) then honeymoon to follow and I really don’t and hope that rain or a cyclone wont ruin it……. Can you please give me your predication if you can see that far in advance to the future?
Cheers for the fabulous work you guys at Weatherwatch are doing! =)

Hi Nikki – it’s too far out to know sorry.  Feel free to ask again this time next week for an accurate prediction.

Thanks for the feedback and support – we really appreciate it!