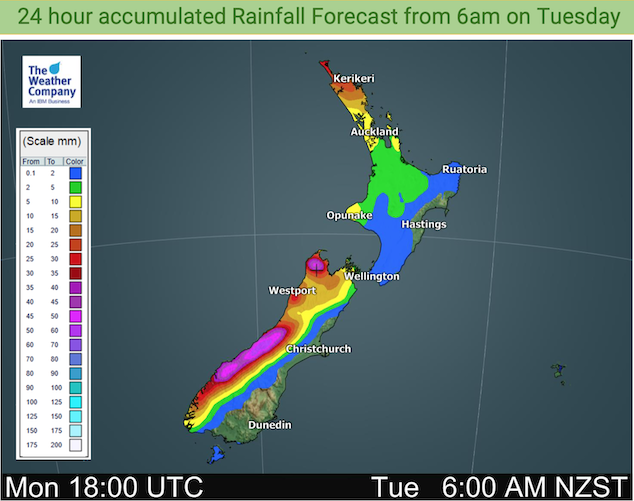 The odd light shower for some western regions today, rain moves into the West Coast of the South Island and Northland this evening / overnight. Eastern regions have a dry day. Check out today’s national forecast for a region by region outlook for your area.

A front passes from west to east over New Zealand tomorrow, rain about Nelson / Marlborough and the upper North Island may be heavy then easing later in the day / overnight. The east coast of the South Island stays mainly dry (apart from Marlborough) but the eastern North Island does see some rain which becomes heavy for a time in the evening, mainly about Hawkes Bay.

A fast moving from pushes in from the west on Thursday, dry to start about some western areas then rain or showers from afternoon including Nelson / Marlborough. A chance of heavy falls with thunder from afternoon about the western North Island then easing later in the day. The east coast of the North Island is dry then expect a few showers late afternoon / evening spreading from the west. A dry day for the east coast of the South Island although expect rain or showers about the Canterbury high country from late afternoon / evening.

On Friday expect showers in the west and dry weather out east in a northwesterly airflow. Showers for the West Coast north of the Glaciers and about the western North Island may be heavy at times with thunder then easing in the evening.