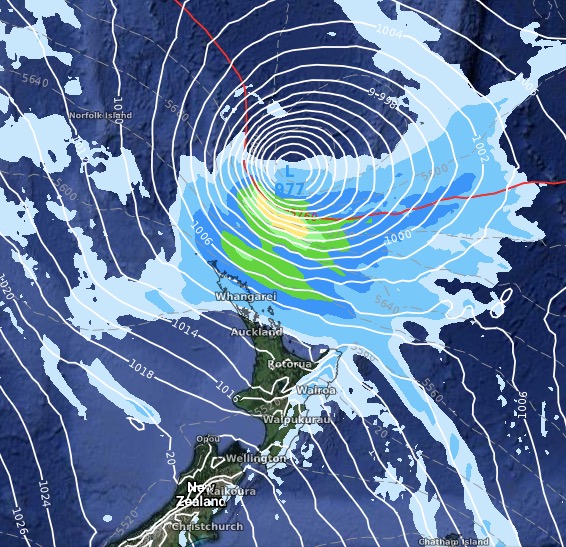 A tropical cyclone is forming in the Coral Sea and will likely brush northern NZ next week, with latest modelling today suggesting a direct hit is less likely – but still possible.

But it’s a very close call with high pressure in the Tasman Sea the key deciding factor on if the cyclone brings any severe weather to New Zealand, or brushes by just out to sea. “The cyclone just brushing us from a distance won’t likely cause many issues but a slight shift in tracking could make this become more serious quite quickly” says WeatherWatch.co.nz head forecaster Philip Duncan.

“It’s a fairly simple equation. Whoever reaches NZ first wins – the high over the Tasman Sea, or the cyclone from the Coral Sea”. Latest modelling from Europe and America continues to suggest the cyclone (which will be an ex-cyclone by the time it reaches NZ) will pull just further east allowing severe weather to bypass us – but this is not yet locked in. We expect by Sunday PM to be able to.

“The outer edges of cyclones aren’t any worse than the usual weather we get in NZ, a bit of a breeze, some showers or patches of rain” says Mr Duncan “but people need to appreciate how serious the weather may be just offshore, not only churning up beaches and making for dangerous sea conditions but the fact it is a powerful storm and could track closer to NZ bringing severe weather with it, suddenly changing forecasts”. Mr Duncan says it’s too close to rule out no severe weather here but latest modelling does suggest the worst stays out to sea.

For drought areas this may be frustrating news as this rain would have had potential to make a serious dent in drought conditions. There may still be some helpful rain but to make sense of all the maps and confusion, please refer to your local 10 day forecast which not only includes HOURLY wind forecasts for 10 full days out, but also rainfall TOTALS calculated by IBM’s super computer Watson (which factors in hundreds of computer models so you don’t have to!).

As of 9am Saturday New Zealand Time the cyclone had still not been named by the Australians. It should be named “GRETEL” this weekend.

THE MAPS – NEXT 3 FOR THIS COMING TUESDAY AT NOON:
GFS (America) – Has leaned more accurate with recent storms

UK Model (not our usual ‘go to’ but paints a more serious set up – accuracy less tested here, but helpful to demonstrate there is still uncertainty with global modelling)

IBM MAPS – Exclusively made for WeatherWatch.co.nz:

So Phil what are our chances that this cyclone changes its position and actually does hit NZ?

Morning Phil, it’s not looking to do that due to the dominant high pressure belt out in the Tasman Sea (which is moving in faster and stronger than the storm is). So the chances would be less than 20% at this stage.
Cheers
Phil D