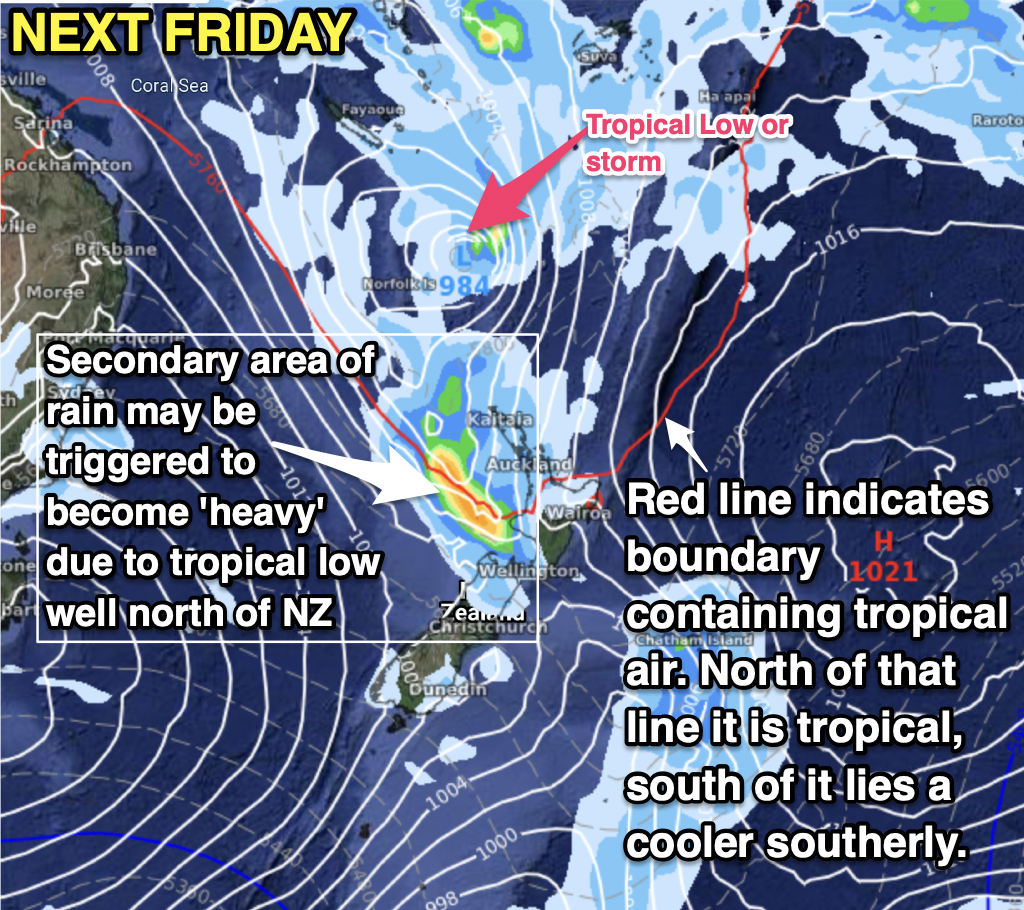 After Waitangi Weekend’s rain maker the North Island looks to have another rain event this coming weekend says WeatherWatch.co.nz – along with the West Coast and upper South Island.

Even if a tropical cyclone doesn’t form a tropical depression looks quite likely to drop southwards towards NZ by this Friday or next weekend and even if that low misses us it may still connect with other systems in the Tasman Sea to generate heavy rain on the West Coast again and into the North Island. It’s not yet locked in – but certainly one to watch.

The setup means the sub-tropical jetstream (the boundary that separates our temperate climate with the more muggy/humid tropical air) will drop south over the upper North Island this coming week. “This is the opposite to winter when the sub-Antarctic airflows come over NZ bringing snow to sea level, in this case instead of Antarctic air bringing Southern Ocean conditions we have Tropical air bringing weather conditions Fiji and Tonga usually have” says head forecaster Philip Duncan.

With the low yet to properly develop rainfall totals in your local forecasts may still move around a bit as better data comes into the mix in the days ahead.

“Basically this low pressure zone is dragging down the tropics with it, like popping a water balloon it’s likely to drop a fair bit of moisture in a short period time. The only thing left to work out is precise tracking as that determines if the rain will directly affect NZ, or mainly fall nearby out at sea” says Duncan.

“We’re not just watching one storm and the rain with it – we’re watching to see how this large pool of tropical low pressure will interact with other systems in the NZ area. It is quite complicated so we need a few more days to be more confident of how this will pan out”.

The maps below all currently show rain likely in the NZ area over the coming 10 days – and include the rain still moving in this weekend.

The rainfall % and totals in your local WeatherWatch and RuralWeather forecasts are updated HOURLY and utilise IBM’s supercomputer Watson to crunch international modelling as well as local data. The closer to next weekend we are the more accuracy and confidence there is in the rainfall data, but forecasts for this weekend should be highly accurate now.