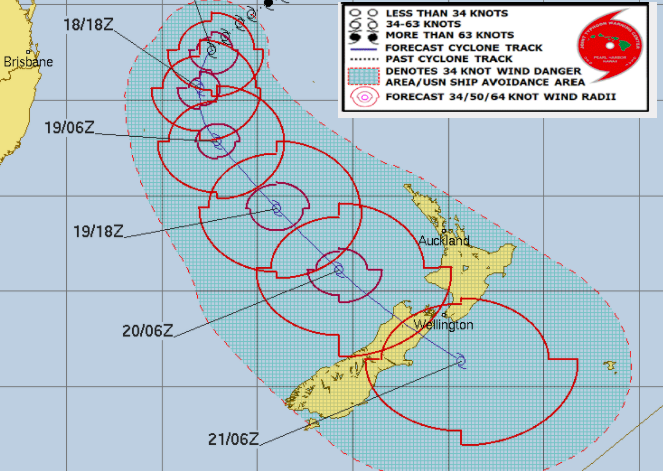 Tropical Cyclone Gita remains a Category 2 storm with winds sustained at around 100km/h gusting 120km/h out at sea. The storm is tracking SW at 9 knots. The air pressure is estimated to be around 975hPa with little change expected in pressure depth.
Please note the wind measurements are at sea – while Gita’s sustained winds will continue to slowly weaken back a small amount as it tracks to New Zealand the mountains and ranges of New Zealand combined with the storm becoming extra-tropical could see gusts in the mountains and ranges of central New Zealand exceed 150km/h. This could affect some valleys and wind tunnels near the ranges too. Precise wind speeds and areas worst affected still can’t be locked in for another 24 to 36 hours even.
According to the US Joint Typhoon Warning Center (JTWC), which provides detailed data every 6 hours on this cyclone while it remains tropical, Gita has now tracked into unfavourable conditions for the first time. Sea temperatures are around 25 degrees and this is “unfavourable for additional development” (while the storm remains tropical). However JTWC only focus on “tropical” cyclones not “extra-tropical” which can be similar storms powerwise.
The JTWC forecasts Gita will begin to transition out of a tropical cyclone and into an extra-tropical cyclone overnight Monday and into Tuesday itself. It’s likely to complete this fully just before it makes landfall in New Zealand later on Tuesday. This action doesn’t mean the storm is finished, it means it has transitioned out of having a warm tropical core to a colder core which changes the shape of the centre of the low over the following 24 hours (into Wednesday).
As Gita hits the South Island on Tuesday PM (especially evening) it is forecast by JTWC to have winds sustained at over 80km/h nearest to the centre – making it equivalent to a strong Category 1 Tropical Cyclone (and not far below being a ‘low end’ Category 2). 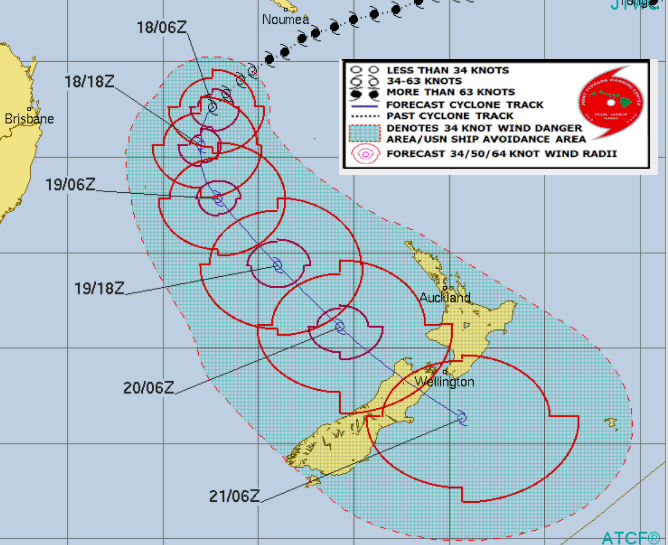 However WeatherWatch.co.nz says once Gita hits the upper South Island and lower/south western North Island on Tuesday evening it’s expected to rapidly develop a secondary centre – this will have fast and significant changes to wind speeds, angles and rainfall with the energy spreading into new places. This action means some areas currently expecting gales may not get them while others who are not expecting them may find wind warnings being issued.
There are many moving parts to this storm system, from it shifting out of tropical to extra-tropical, its structure changing with two lows forming and the large mountains and ranges in both islands all working to make fine tuning of where the severe weather will be worst (along with when and how long this will happen) even harder.
Keep up to date with MetService watches and warnings provided on behalf of the New Zealand Government.
WeatherWatch.co.nz will have our next weather video update out on Monday around noon. We’ll also step up the news updates as we head across Monday and Tuesday, better clarifying which regions are most exposed and which may not be affected a great deal. As of Sunday evening it appears the very northern and southern ends of the country may be least exposed to severe weather – but please do not lock this in yet as cyclones can move from the forecast track by as much as 100 or 200kms sometimes.
As of 10pm both ECMWF and GFS modelling were in agreement about Tuesday evening, picking landfall in the north western quarter of the upper South Island on Tuesday evening with severe weather beginning as early as late morning/early afternoon for some on Tuesday – peaking at night.
More details from the WeatherWatch.co.nz and IBM’s Weather Company team on Monday.
– WeatherWatch.co.nz, with data and extra details from JTWC (US Government).

Thank you for the detailed analysis, great stuff guys, you really are doing us all a wonderful service.
I’m in Greymouth and have been following these storms for a number of years, cyclone Ita did a tremendous amount of damage here in 2014, and Fehi did an astonishing amount of coastal erosion a few weeks ago. Unfortunately the contractors have not been able to fully repair the damage in time and the coastline is terribly exposed in parts of Cobden near Greymouth. This is the most worried I have ever been for an impending weather event, the downslope wind effects with these storms can be terrifying when the wind comes from the east over the hills behind Greymouth.
I think this storm could be one for the record books, I hope I am wrong, but the potential for it to be a record breaker is pretty high if the latest forecasts prove to be accurate.
Thanks again for the update.
Daniel.