Home > News > Latest on stormy weather on the way for ... 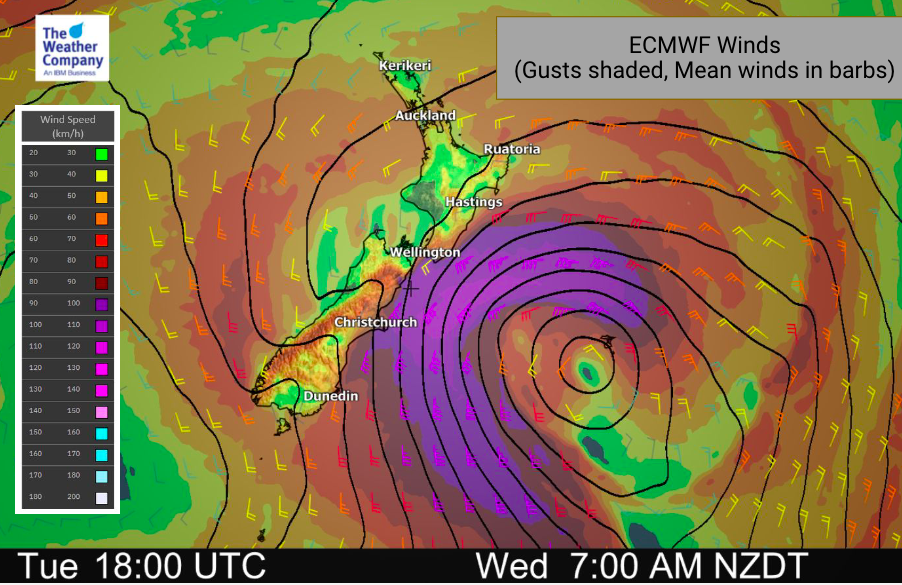 A low will rapidly deepen after it crosses the South Island over the next couple of days, bringing areas of severe weather.

RAIN:
Heavy at times in both main islands but in particular the lower South Island and West Coast. Rainfall totals aren’t too extreme from this event with max totals on the West Coast of around 50 to 80mm.

SNOW:
Mostly in the mountains and ranges but some flurries could go much lower but should be unlikely to cause major issues, other than impacting highways / roads. Snowfall in the mountains peaks on Tuesday.

GALES:
Two surges of windy weather, the usual gusty north to north westerlies ahead of the front and low on Monday, followed by the strengthening south to south west flow behind the low once it moves through and lies east of Otago/Canterbury over Tuesday and Wednesday. It’s this area the storm will grow with the worst winds between Coastal Otago and Canterbury then out east to the Chatham Islands. The bulk of the damaging winds will be at sea but will brush these coastal parts of the mainland with potentially damagaing severe gales over 100km/h.

It’s a little bit of one step forward one step backward as the low deepens offshore but also tries to move away from NZ at the same time, limiting how far reaching the damaging portion will be.

TEMPERATURES:
Warmer than average air lies ahead of this system, especially on Sunday and Monday with the northerly flow. Even Tuesday may see mild weather at first, but the colder air then comes in. Dunedin’s high on Tuesday and Wednesday is around +7C at the warmest part of the day, Gore has a high of +8C for those two days and other parts of Southland may only reach +6C on Tuesday as the MAXimum temperature!

FROSTS:
Frosty weather (or below zero temperatures) will expand across a large portion of the South Island over Tuesday and Wednesday.

NOT EVERYONE IMPACTED:
As is so often the case in New Zealand our mountains and ranges will help protect many regions from any severe weather, while they may enhance the sever weather for others. Most impacted by severe weather looks to be many parts of the South Island and lower North Island. Northern NZ looks least impacted.