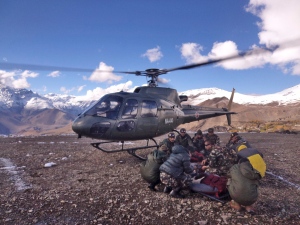 Three New Zealanders have escaped from a deadly blizzard in Nepal’s Annapurna Ranges.

Ann Young from Trekking Adventures says her group of three Kiwis and three Americans have escaped through torrential rain.

“They’ve had a 30-hour Jeep journey through landslides and waterfalls and rivers and so on.”

Ann Young expects other tourists in the area to come out later today.