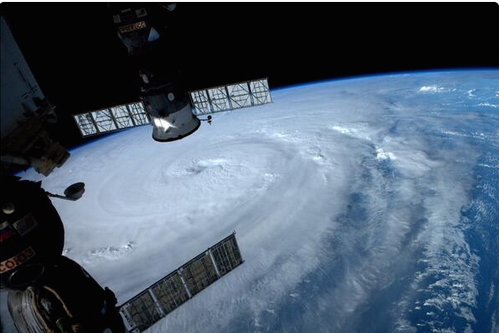 Typhoon Neoguri lashed Okinawa with strong winds and heavy rain Tuesday as it spun near the Japanese island.

The storm weakened from super typhoon strength as it drew closer to Okinawa and its surrounding islands, where Japan’s weather agency has issued an emergency warning.

Okinawa, the site of multiple U.S. military facilities, regularly finds itself in the path of big typhoons. Buildings on the island are designed to withstand the powerful winds that come roaring in off the Western Pacific.

“Winds are buffeting Okinawa, it’s not going to take a direct hit,” said meteorologist Tom Sater. The storm is expected to pass about 130 kilometers (80 miles) to the west of the island.

Okinawa’s main airport was closed, along with schools and many businesses.

Authorities at Kadena Air Base, the largest U.S. military installation in the Asia-Pacific region, told the thousands of service members and their families at the facility that all outside activity was forbidden Tuesday morning.

The storm had lost strength early Tuesday, going from the equivalent of a Category 5 hurricane to a Category 3, according to Sater.

It’s packing maximum sustained winds of around 205 kph (125 mph) at its center. In Naha, the main city on Okinawa, winds of 141 kph were recorded early Tuesday.

While Okinawa is being spared the worst of Neoguri’s fury, there are concerns about the damage the typhoon could do later in the week when it’s forecast to reach Kyushu, the southernmost of Japan’s main islands.

The storm is expected to have lost a lot of its force by the time it arrives early Thursday, but that’s not the main fear.

“This is not about wind, it’s all about rainfall,” Sater said, noting that parts of Kyushu have already experienced heavy rains in recent days. The rivers are swollen and the ground is saturated, he said.

Authorities have already relocated about 84,000 people from areas of Kyushu vulnerable to flooding.

Astronaut Reid Wiseman in the International Space Center tweeted a photo over the weekend of the typhoon viewed from above, showing vast bands of cloud spiraling out from its center.

Each summer and autumn, heavy storms roll in from the Western Pacific, often causing damage in East Asian countries such as the Philippines, China and Japan.