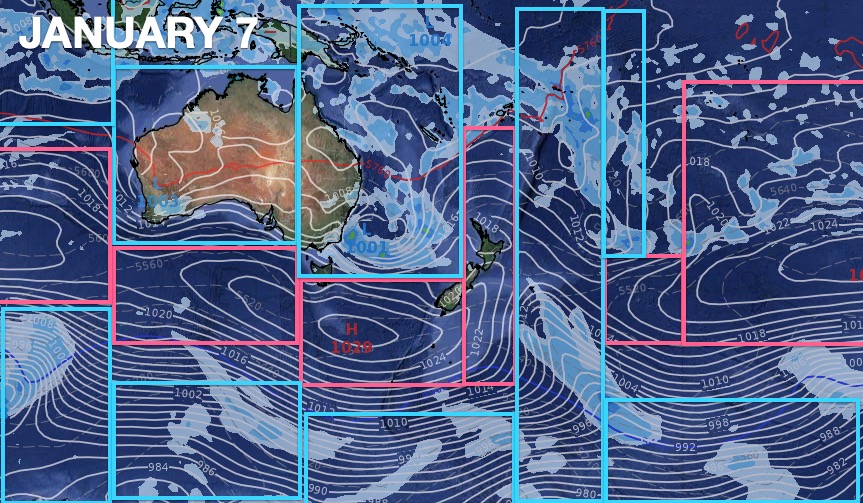 We have the long range climate forecast for January 2021 and it shows La Niña becoming more obvious on the weather maps – but stubborn high pressure over the North Island won’t budge much.

Low pressure now dominates north of NZ, northern Australia and much of the Tasman Sea, while high pressure continues to dominate east of NZ, over the upper North Island and across southern Australia. (as you can see in the three Lows and Highs maps for January below).

Now, as we head into January 2021, we see little signs of change for the upper North Island, although we do expect an uptick in afternoon downpours inland which will bring small pockets of relief to dry places.

For Auckland it’s looking drier than it is wetter. While some big rainmakers look to be nearby, that persistent high pressure belt to the east may well stop (or limit) how much rain arrives in the Hunua ranges, where much of Auckland’s drinking water is stored.

As we said in November 2020, La Niña would be moderate this year and short lived – meaning while it is a silver lining for dry areas, it is not a silver bullet to fix the droughts. We need at least two significant rain events in the upper North Island simply to begin making up for two drier than normal years in a row.

La Niña’s rains are dominating eastern Australia and some of that and low pressure is sliding into the New Zealand. La Niña is producing rain for NZ this summer but it’s a bit patchy, mainly coming in from the west and into the South Island from Australia.

As most farmers and growers know, WeatherWatch.co.nz is the only forecaster mentioning how active the Southern Ocean’s weather pattern is at the moment. We exclusively talked about this in November and December while Government Agency NIWA along with most mainstream media outlets kept repeating “hot” summer on the way. The Southern Ocean’s weather pattern is stormier and kicked off the first half of December 2020 with windy westerlies and the final days of December with this cold southerly and snow on the South Island ranges.

We don’t expect the Southern Ocean to be as active in January but large highs over Tasmania will likely still help encourage a few colder southerly days across New Zealand. Repeat: La Niña isn’t as powerful as some may think for NZ this is why we’ve been reserved and skeptical about it bringing the heat and rain relief many thought might be on the way, due to mainstream news stories last month quoting Government forecasters. However we do expect humidity to slowly creep back across northern NZ in January and this will lift up the “feels like” or humidex temperatures in many places, especially inland.

OVERALL:
La Niña continues to moderately impact NZ with rainfall further south but high pressure to our east is keeping the upper North Island drier than it should be and may continue on this way into January.

DROUGHT RISK:
WeatherWatch.co.nz and RuralWeather.co.nz maintain that two years of below normal rainfall in northern New Zealand (north of Taupo) coupled with a much drier than usual start to summer means many regions already look like they are at the start of February already, not the end of December.

Long range data by IBM suggests La Niña rainmakers may have a better chance of making it into northern NZ later this month – but is still not locked in due to the stubborn northern high pressure. For now, a drier than usual pattern continues on but with the added benefit of an increased chance of inland downpours in the weeks ahead – and some Tasman Sea rainmakers sliding east to south east across NZ.

Aucklanders should be encouraged to once again reduce water use with no signs of significant rain in the next two weeks, unless a random thunderstorm/afternoon downpour happens to cross the Hunua Ranges. We advise Auckland Council and Watercare to more publicly engage with Aucklanders to reduce water usage at this critical time of year.

As for droughts technically forming – that’s up to local communities and authorities to announce, but the weather is encouraging drought-like conditions already and we expect some places to get drier in the weeks ahead – not wetter. All eyes will be on how La Niña’s northern low pressure system behave later this month – and also if that stubborn upper North Island high pressure can finally shift away after two years of frequently dominating and blocking most rainmakers there.

HOW JANUARY IS SHAPING UP – The Highs and Lows…

www.WeatherWatch.co.nz – “New Zealand’s most accurate rain forecaster” (*According to a recent independent weather review by a large NZ Government Agency)