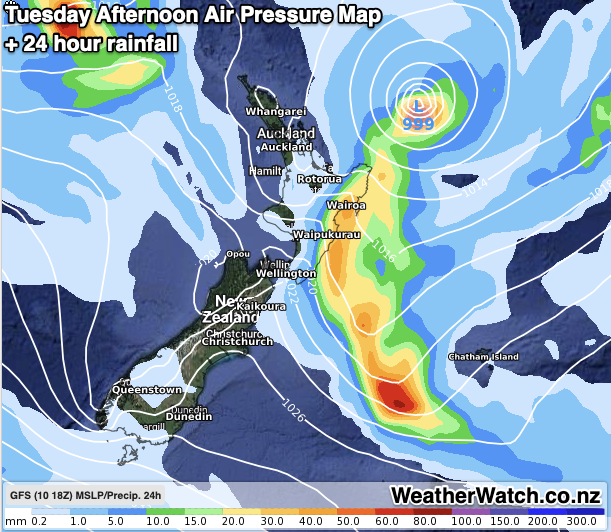 Weather forecasters continue to monitor a low pressure zone which is approaching the North Island from the east.

The low, which one week ago was short-lived Cyclone Eva’s “twin”, has continued to spiral well east of NZ as Eva’s remnants fell apart fast in the north Tasman Sea. Eva went west, and this low drifted east. Now, as this “twin” low starts to drift back towards NZ, it will likely be centred north of East Cape on Monday then stall for a number of days. It may then also start to deepen.

But – where the centre of the low stalls is the big question. At the same time the low drifts in westwards towards northern NZ an exceptionally powerful late summer high pressure zone will be drifting into towards southern NZ. If this high moves in faster, or pushes further north – it may significantly impact how far south down the eastern side of NZ the rain may go. Likewise, if the high holds back from moving in, then the rain may be heavier further southwards. So this is what we say is “one to watch”. The data over the past 48 hours certainly leans towards very heavy rain for the eastern North Island but for some people still in need of rain this may not deliver what you want.

While this incoming low isn’t directly related to the flooding rains in eastern Australia, it is a similar set up where low pressure will stall along part of our eastern coast and it also has the potential to remain there for days hugging the eastern coastline. However our totals don’t look as big as the Aussie numbers and there is still a chance that rainfall totals will back off from where they are today. Updates over the weekend will help firm up the scenario looking most likely, so check back for our morning updates.

Easterlies and lows coming in from the east are more likely during a La Nina summer. While La Nina has now peaked, it does still remain with us and adds a bit more fuel to the easterly winds and chance of low pressure zones in the north of the country.