Home > News > Is the top of NZ turning to drought agai...

Is the top of NZ turning to drought again? La Nina is drenching Aussie, but not NZ… yet (+10 Maps) 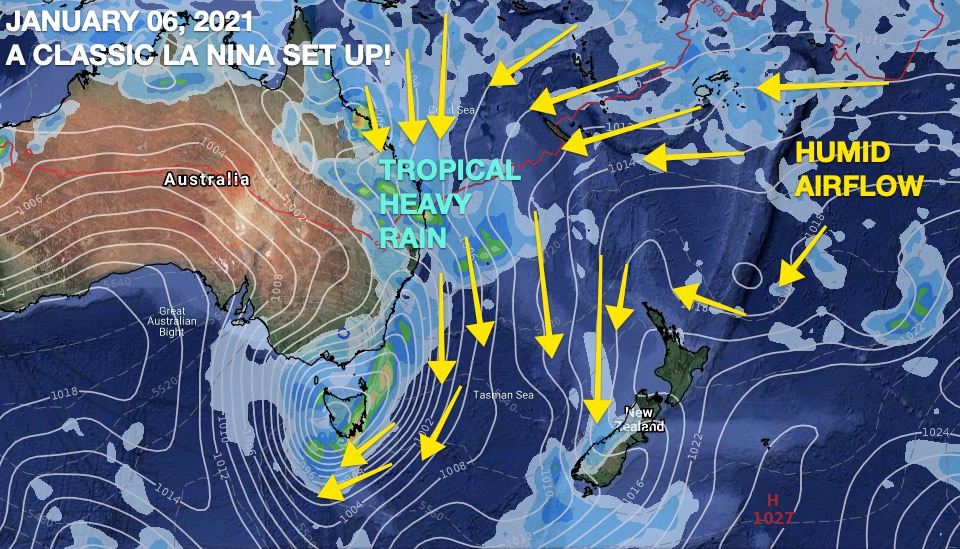 High pressure killed off Cyclone Yasa from reaching NZ, now forecasters are looking for the next rain maker.

This week rain will be crossing the South Island and lower North Island – but very little falls in the north of NZ.

Farmers are now asking WeatherWatch.co.nz if a drought is forming. “We said in spring that La Nina this year would only be moderate and it was more of a silver lining rather than a silver bullet to the ongoing dry issues in northern NZ” says head forecaster Philip Duncan.

For some northerners it’s been two years with below normal rainfall.

“The next several days again look drier than normal for Northland, Auckland, Waikato, Coromandel Peninsula and parts of Bay of Plenty”.

In fact, Duncan says the rainfall figures for Auckland northwards remain well below normal for the next two weeks, or longer, going across the first week of January 2021.

“We’re needing a big wet set up like the entire eastern side of Australia has been seeing lately – and will be seeing more of in January”.

“Last year we caught the same big dry weather pattern Australia had, which lead to similar drought zones forming in New Zealand. This year and into early next year Aussie is forecast to get some big rainmakers. This means despite the bubble of dry northern NZ remains locked in, there are signs this could still change in January”.

And it’s only northern NZ that appears stuck most in this dry spell with rain coming this week into many other areas further south.

WeatherWatch.co.nz won’t be releasing out January Climate Outlook until later next week, but in that update the main focus will be on where the main rain makers are and what impact they might have on Auckland’s water storage dams and also farms across Waikato, Auckland, Bay of Plenty and Northland in particular.

all those months from dec on wards are due for some rain it can just change over night it might be down down south from jan onwards this year its just buttering them up before the la nina kicks in …aussie would be dry if it wasnt for those highs over nz diverting the rain makers on them and they use to moan!!!!!!

Hey ww. I’m not losing hope. I think this summer won’t be drought. I think we might get a wetter January. What do you think?