In NZ we share La Nina with our usual weather pattern, as western rain returns 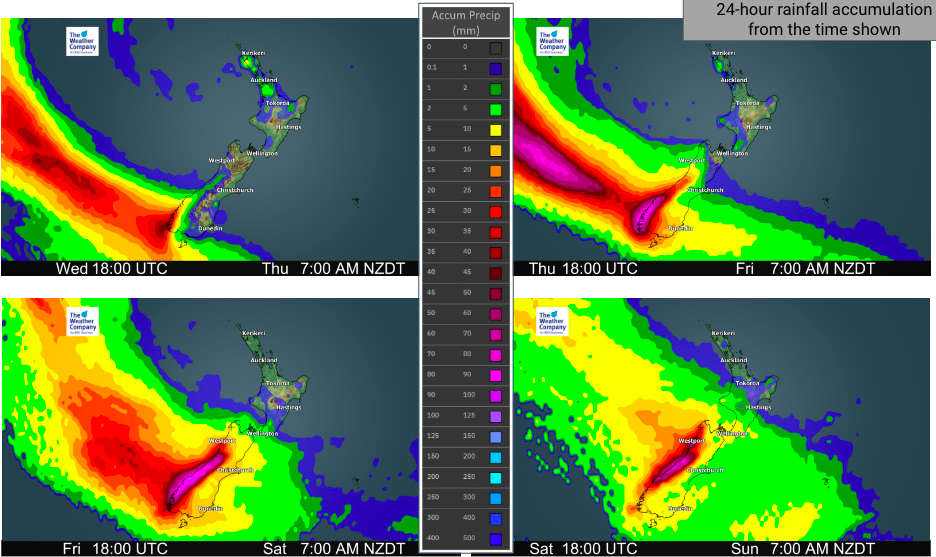 La Nina may have been declared but the next round of rain coming for NZ is coming in from the west – even if it does have some sub-tropical elements to it.

“Just because La Nina is announced doesn’t mean your region is in for nonstop tropical rain” says head forecaster Philip Duncan. “La Nina is measured at the equator and NZ is halfway from there to Antarctica”.

Duncan says to think of NZ as one large traffic island in the middle of the South Pacific weather patterns. “We have a northern lane that brings La Nina humidity and perhaps the odd big rainmaker and ex-cyclone, but we also have the usual ‘State Highway 1 of westerly driven weather’ out of the Southern Ocean/south Australia region – so we have two weather patterns dominating us, it’s not just La Nina from the north”.

And that is highlighted with the upcoming rain, which once again will be connected to Australia and a localised Southern Ocean southerly for southern NZ. This means the bulk of the rain will fall where it traditionally falls – the West Coast, especially the southern end towards Fiordland.

This rain will also be helpful spilling over into Southland and Otago which have had plenty of rain events lately. This isn’t always the case in a stronger La Nina as that can stop these westerly and southerly rain events from coming in and increase the chances of southern droughts.

Duncan says these messier patterns – rather than one powerful La Nina pattern dominating – means NZ has better chances for variety in December and that does help somewhat reduce the chances of droughts forming.

La Nina may be short lived again this season – peaking over summer and easing in Feb/March – and while it does increase the risk of some localised floods and droughts, it’s worth balancing that with other weather patterns too.

This summer NZ needs to be prepared for whatever is thrown at us – it might be coming in from any direction, not just out of the tropics.