Home > News > Humidity and heat coming for Wednesday a...

Humidity and heat coming for Wednesday and Thursday (+2 InfoGraphics) 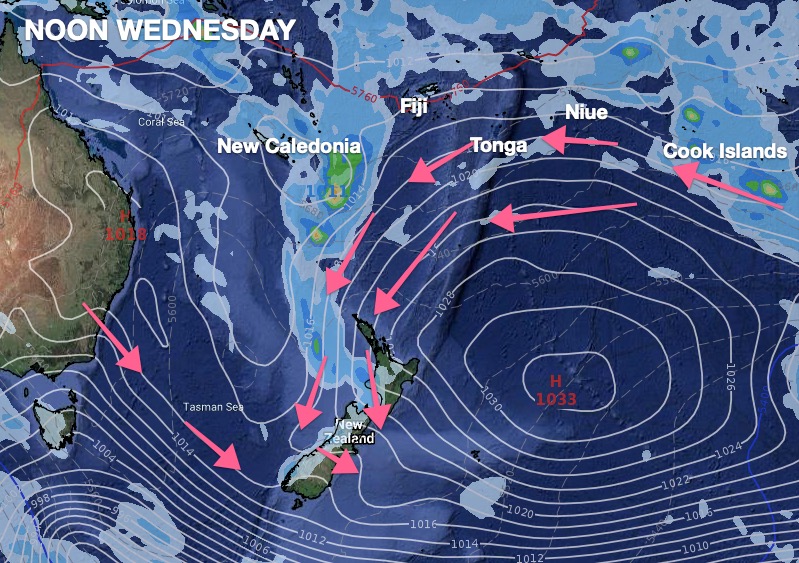 A humid sub-tropical northerly flow across New Zealand by mid-week will push overnight lows closer to 20 degrees in the upper North Island and daytime highs closer to 30 degrees through some inland parts of the South Island.

The airflow will see pockets of heavy rain feeding in to some areas – like the West Coast, Nelson Ranges and Mt Taranaki. A few heavy downpours will also brush the upper North Island.

But the airflow will push temperatures well up.

On Tuesday night parts of Northland have overnight lows of 18 degrees, Auckland 17 degrees.

In Tauranga Tuesday’s overnight low is 16 degrees and the high on Wednesday is just two degrees higher on 18C. This is due to the humid, cloud and sub-tropical northerly flow feeding in.

Further down NZ and the airflow interacts with the Southern Alps and other ranges. This strips the air of more moisture, so as it moves into the upper and western South Island it drops the heavy rain – then the drier airflow moves down over Canterbury, Otago and Southland boosting daytime highs into the mid to late 20s with plenty of sunny weather. We may even see 30 degrees reached if the cloud cover breaks up properly during daytime.

Tonight there’s a risk of a light frost in Northern Southland. But by Tuesday afternoon it will be several degrees above average and same again on Wednesday.

WeatherWatch.co.nz says warmer weather will be off and on around NZ until this Friday in the south and this weekend further north. In fact on Sunday some Southland locations may have a daytime high in the single digits!

Check www.RuralWeather.co.nz to see temperature trends, frost forecaster and humidex readings every hour for 10 days out.