Home > News > Heavy rain, gales and a colder change as... 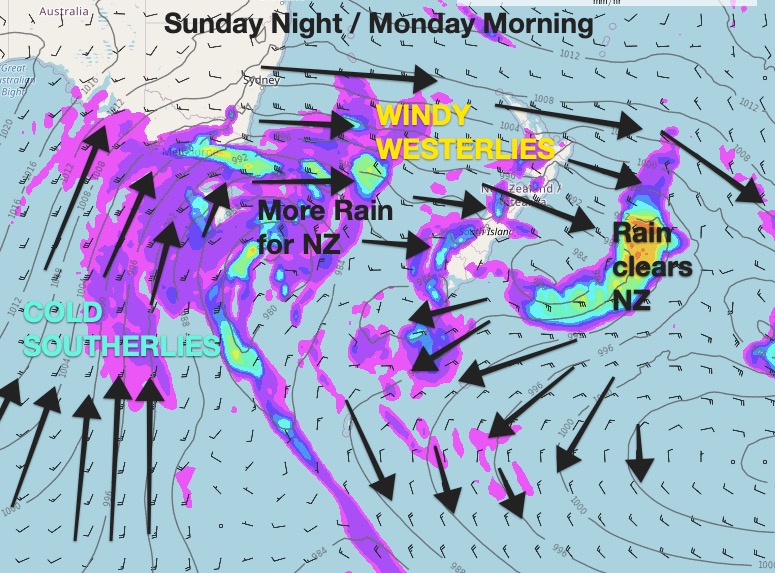 It’s sunny and hot in a number of regions today but the clouds in the west are building ahead of stormy spring weather returning to NZ from Australia on Friday, the weekend and the start of next week.

TEMPERATURES:
Thursday and Friday will be several degrees above average with some locations over 8 degrees above normal. Some places will be in the mid, possibly upper 20s this afternoon and again on Friday as warm winds blow through from the north.

GALES:
Strong winds push through on Friday with north west gales in exposed parts of NZ – mostly through the Southern Alps, mountains/ranges and coastal zones. The North Island has a windy few days ahead too but peak winds don’t look quite as intense as the South Island. Still, severe winds are possible in both main islands from Friday to early next week.

Speaking of next week, many of your local forecasts will be seeing a return of the ‘windy westerlies’.

HEAVY RAIN:
Western parts of NZ are in for a number of wet days with the West Coast likely to receive over 200mm. The North Island has lower totals but western areas do still lean wetter than average for mid November, while the east (especially the eastern North Island) aren’t as week. Eastern areas that are most likely to get rain will be in the upper North Island and the lower South Island.

METSERVICE WARNINGS:
Severe weather warnings via MetService can now be found LIVE on the WeatherWatch.co.nz website. Already MetService has issued severe weather watches indicating warnings will likely be issued across both main islands in the days ahead.

JUST WHAT EXACTLY IS COMING TO NZ?
A few low pressure systems are coming to NZ directly from Australia and falling apart in our part of the world. It’s the fact there are at least three or four lows in a row, merging together in the days ahead, that will create the unsettled weather. Not everyone will have windy weather all the time but the low pressure zone is very large in the days coming up – meaning unsettled weather is more likely across the country and favours westerlies kicking in by Sunday and rain mostly impacting the western side of the nation from Friday through next week.

There are a couple of pulses of colder air – the first this weekend and, as this map indicates, another southerly building in Aussie by Monday, which should reach the lower part of NZ in the first half of next week.