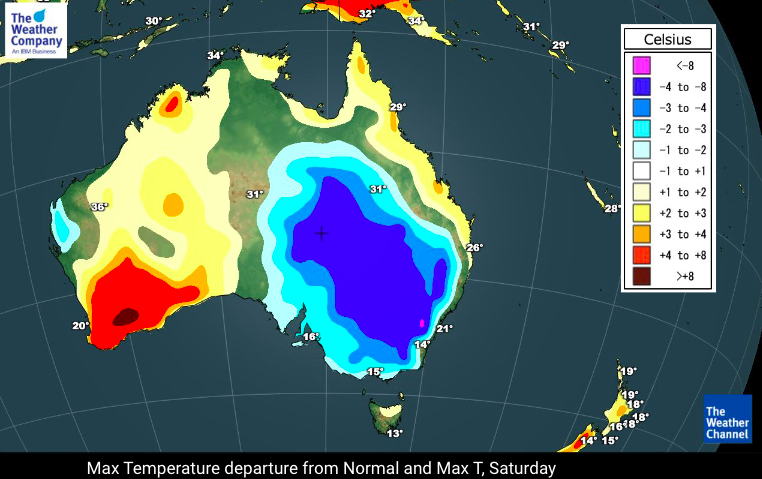 NZ and Australia have big temperature fluctuations this weekend and early next week. Spring is all about winter slowly fading away and hints of summer slowly coming in.

NEW ZEALAND:
This week NZ had a cold southerly with snow returning to the ranges of both islands, now high pressure is locking in that cold bringing lower overnight temperatures but mild afternoons.

The biggest change this weekend will be with overnight lows which go from being below normal again tonight – to well above normal by Sunday night.

It’s not just the overnight temperatures either. Daytime highs are lifting up across today, Saturday and Sunday as sub-tropical and/or northerly winds move in.

But make the most of it. By Tuesday another wintry southerly will brush Southland and Otago, with some places only having single digit daytime highs, while highs of +20 degrees are possible on Sunday.

For example, Gore has a high of around 20C on Sunday but a high of only +8C by Tuesday as a southerly returns!

AUSTRALIA
A storm will deepen just off the east coast of Tasmania today and Saturday, driving in a colder southerly right across much of the eastern side of Australia, impacting TAS, NSW, ACT and SA the most.

Meanwhile WA is leaning the other way, with warmer than average weather on Saturday.

This means by Sunday the cold will retreat in the east while the heat expands in the west and heads eastwards towards Melbourne.