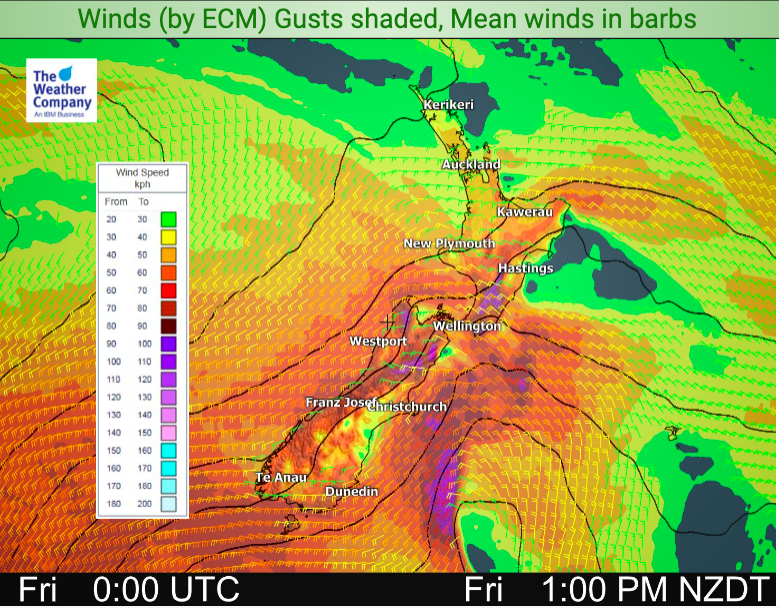 It’s back to more wintry weather for some parts of NZ as a now two-week-run of spring-like weather (with warm and cold days mixed up with windy weather) finally comes to an end.

The south to south west change will put parts of the South Island below normal today temperature-wise and by tonight many parts of the country will be feeling colder.

In fact, it will be cold enough for the chance of frosts through the high country and areas well inland. The Below Zero temperature maps at WeatherWatch.co.nz highlight which areas are most exposed (in purple shading) for having a frost overnight tonight and into Saturday morning.

Elsewhere it will be too windy, cloudy or mild for frosts.

The North Island gets a cool down but the main feature will be humidity dropping even further. The lower humidity air will feel cooler anyway, the temperature drop will make sleeping easier at night for many too.

Northland, Auckland, Waikato & Bay Of Plenty
West to south west winds and fairly cloudy in the west, sunniest in the east and about Bay of Plenty. Mainly dry but might be a few western showers in Waikato and Auckland later.
Highs: 19-25

Eastern North Island
Dry with windy westerlies and more cloud around Wairarapa – sunnier and hotter the further north you go with Gisborne more likely to reach the late 20s and Wairarapa the late teens or maybe 20.
Highs: 18-29

Wellington
Windy nor’westers and mainly cloudy. Dry for the most part.
High: 17 or 18

Marlborough & Nelson
Clouds increasing with maybe some showers or spits of rain in Nelson, especially in the ranges. Mainly dry in the east with sunnier weather.
Highs: 16 – 22

Canterbury
Rain in the mountains but mainly dry elsewhere with perhaps a shower or spit. Cooler Westerlies kicking in.
Highs: 10 – 20

West Coast
Rain with some heavy falls, easing by the end of the day to showers. Cooler SW winds.
Highs: 13 to 15