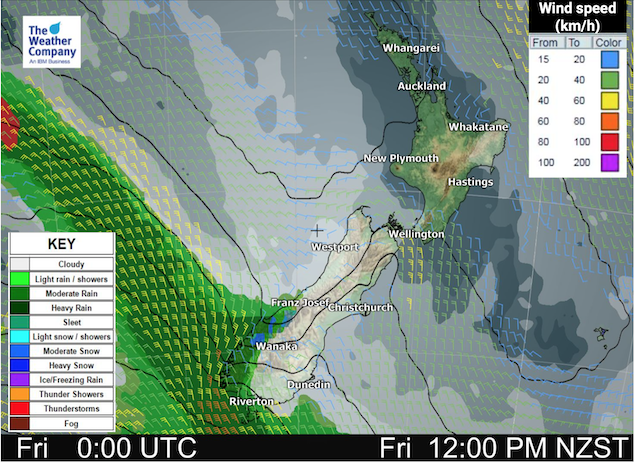 A ridge weakens over the North Island today letting in a westerly airflow. Northwesterlies strengthen over the South Island.

Northland, Auckland, Waikato & Bay Of Plenty
Sunny weather after a cold start, light winds tilt to the southwest in the afternoon. Cloud may start to bank up about western coastal areas from mid afternoon then spreading on land during the evening.
Highs: 14-16

Western North Island (including Central North Island)
A cold start, mostly sunny in the morning then some cloud starts to push in from the west from afternoon. Light winds tend west to northwest after midday.
Highs: 12-14

Canterbury
Sunny areas and increasing high cloud, north to northwesterly winds pick up in the afternoon especially inland. A few spots of rain overnight with heavy falls up in the high country.
Highs: 15-19

West Coast
Cloudy with the odd shower about South Westland spreading north in the afternoon, rain about Fiordland becomes heavy in the afternoon then this spreads northwards later in the day / overnight. North to northwesterly winds increase.
Highs: 11-13

Southland & Otago
Plenty of high cloud, chance of a spit about coastal Southland. Rain moves in during the afternoon then clears later in the evening. Central Otago sees some evening rain, heavy about the Southern Lakes Distrcit then clearing at night. North to northwesterly winds, strong at times for Southland.
Highs: 14-17