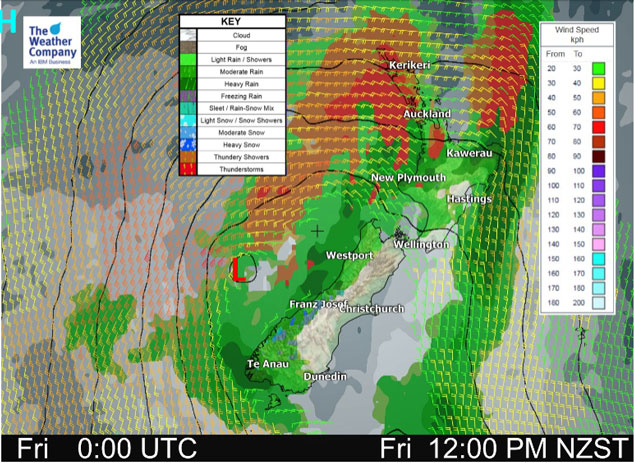 A cold front passes off to the east of the North Island today, in behind a trough brings unstable conditions to the western North Island this afternoon / evening. A southerly airflow gradually develops over the South Island with showers pushing into the south and eventually east.

Northland, Auckland, Waikato & Bay Of Plenty
Morning rain eases, showers pick up in the afternoon (possibly heavy with thunder) as northwesterlies change westerly then easing evening. Showers with possible thunderstorms not arriving till evening about Bay Of Plenty. Some sun may break through in the afternoon at times.
Highs: 15-16

Western North Island (including Central North Island)
Morning rain with heavy falls then easing to showers by midday as northeasterlies tend northwest, showers may become heavy in the afternoon with thunderstorms for Taranaki before easing at night.
Highs: 13-15

Eastern North Island
Rain develops in the morning, clearing in the afternoon and some sun may break through as northeasterly winds tend northwest. Showers pick up overnight about Wairarapa as southwesterlies freshen.
Highs: 16-17

Wellington
Morning rain eases to the odd shower and long dry spells, showers pick up later in the evening or overnight as northerlies change southerly.
Highs: 14

Canterbury
Morning high cloud thins out, some sun breaks through for a time then cloud increases from afternoon with southwesterlies. The odd shower moves in by evening then rain develops overnight about inland areas. Snow lowers to 500m overnight.
Highs: 13-16