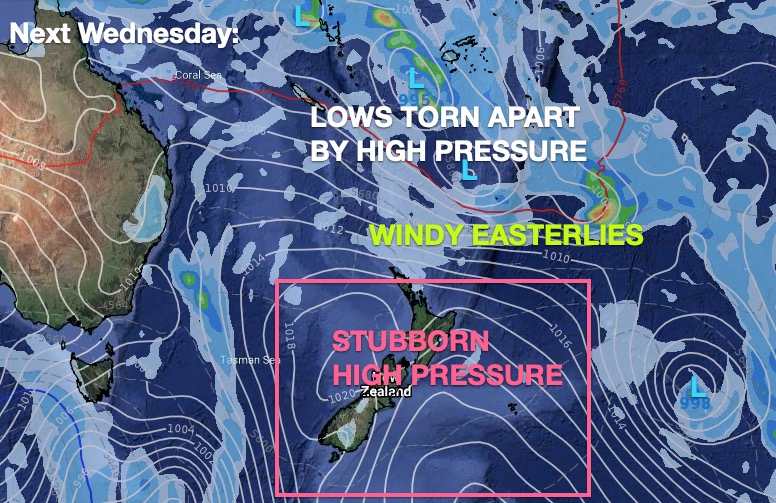 High pressure over northern NZ may once again stop another rainmaker here while Fiji prepares for a possible storm(s).

Computer modelling since last week has been showing a sub-tropical low which has the potential to become a tropical cyclone, but as WeatherWatch.co.nz pointed out there were a number of possible paths. The risk for NZ has never climbed above 35% with this low.

High pressure over the top of New Zealand stopped Cyclone Yasa dead in its tracks from reaching NZ. The storm fell apart just north east of the country in December after running into a high over NZ.

Latest modelling today again shows the stubborn high pressure over northern NZ may again stop another much needed rainmaker (even if we didn’t want the cyclone part). Farmers in northern NZ have been especially hopeful of a tropical rainmaker. Northern NZ has had a rainfall deficit for 2 years now, caused specifically by extra high pressure stuck over us.

Now those in Fiji will be monitoring the development closely with latest modelling shifting the low further east of New Zealand – but this will also put Fiji in a more vulnerable position for heavy rain and possibly gales.

While today there is a MODERATE to HIGH risk of a Tropical Cyclone forming near Fiji (according to the Fiji Met Service) that risk lingers in the MODERATE range only up until next Monday. The reason being – there isn’t one single area of low pressure. At least two or three lows are removing the energy, spreading it further afield in the tropics making for more downpours and thunderstorms over a larger area – but reducing the risk of a cyclone forming in one spot.

FIJI RISKS:
Low pressure surrounding this main low means the energy is being pulled and stretched. This means while a tropical depression will deepen further, the risk for a tropical cyclone actually forming is only a MODERATE one, despite all the right ingredients being there.

This means wind speeds and coastal flooding may not be the main feature. Instead a lot of heavy rain may be problematic. This isn’t as powerful as Cyclone Yasa in December due to the energy being spread out so much – but it may be a slower system resulting in flooding.

DAILY UPDATES:
WeatherWatch.co.nz will continue updating daily in news and video on any potential cyclone threat for Fiji.

As of today any threat for NZ has reduced significantly and now today’s risk level lies at just 15% based on all modelling we trust and data from IBM (which crunches hundreds of worldwide models and produces you with a single clean forecast and % risk of rain etc).

Risks have reduced significantly in the past 48 hour for NZ with reliable computer modelling from the US and Europe showing the low will likely track further east – reducing the threat to NZ. The threat to NZ isn’t zero though, with the low still forming in a position that could impact us.

Windier easterlies are still likely to impact NZ along with eastern showers in Northland next week. Eastern beaches are also likely to get rougher.

Those looking at long range air pressure maps last week and early this week would have seen NZ having a direct hit by this storm. However the high pressure belt over northern NZ was always going to be the controlling factor (just like with Yasa).

WeatherWatch.co.nz still expects further changes to this forecast – keep up to date with our daily coverage. Use your local 10 day forecast at WeatherWatch.co.nz and RuralWeather.co.nz to monitor rain and wind chances across next week.

So…you don’t want a forecast then – you just want to look out the window on the day! The % of rain and the rainfall totals should help guide you with understanding how long range rainfall risks are. Our news stories and videos also explain the risk. If rainfall is that critical to you, then you need to read the fine print (the supporting content like news, maps and videos). This will drastically reduce your false hope risks. Of course, if we said a 100% chance of 50mm and you had nothing, that’s worthy of a complaint – but I’m guessing it wasn’t overly high % or totals?
– Phil D