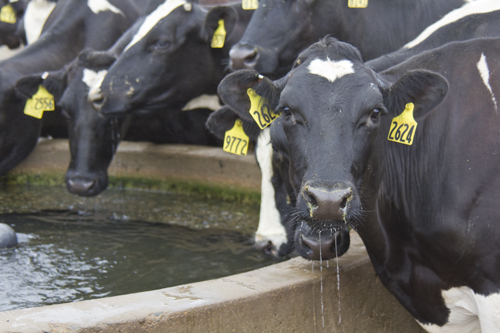 An El Nino pattern that leads to dry conditions on the east coast of the North and South Islands may be imminent, according to the National Institute of Water and Atmospheric Research. Officials yesterday imposed restrictions on water flowing from the Opuha dam in South Canterbury that helps irrigate 16,000 hectares (40,000 acres) of farmland.

Dry conditions could slow output in the second half of the season, affecting the economy and curbing growth to about 2 per cent, economists say.

“We are conscious that milk output may come back a bit as we go through summer” in the Southern Hemisphere, said Doug Steel, senior economist at Bank of New Zealand in Wellington. “An El Nino pattern usually hits agricultural production and the electricity sector via the lack of cheap hydro generation so it’s a drag on GDP.”

Milk production plunged in the 2012-2013 season during New Zealand’s worst drought in 30 years, especially the largest dairy regions on the North Island. This season those northern provinces are enjoying good grass growth so any impact from dry conditions in the south may be less damaging, Steel said.

Still, potential drought looms as farm incomes fall amid a slump in global dairy prices. Fonterra predicts its milk payment per kilogram of milk solids will fall 37 per cent this season.

“Grass is the cheapest source of feed and when the grass doesn’t grow you look to alternatives but you’ll only do that if it’s economic,” Steel said. “With milk prices lower, supplements won’t be as economic.”

Crown climate scientists reported on November 28 that drought conditions may be imminent in several regions unless sustained rainfall occurs.

Environment Canterbury this week imposed restrictions on Opuha Water, which supplies farmers who then supply Fonterra’s Clandeboye plant. Dam storage levels are just above 50 per cent of full, an unprecedented amount reflecting low rainfall and a lack of snowfall in the winter, Opuha’s chief executive said in a November 27 statement.

Farmers are required to reduce their take by 25 per cent to extend the time that water can be provided. If current condition prevail, more severe restrictions will be needed by late January, the company said.