Ex-cyclone June passing near Norfolk Is, next stop NZ 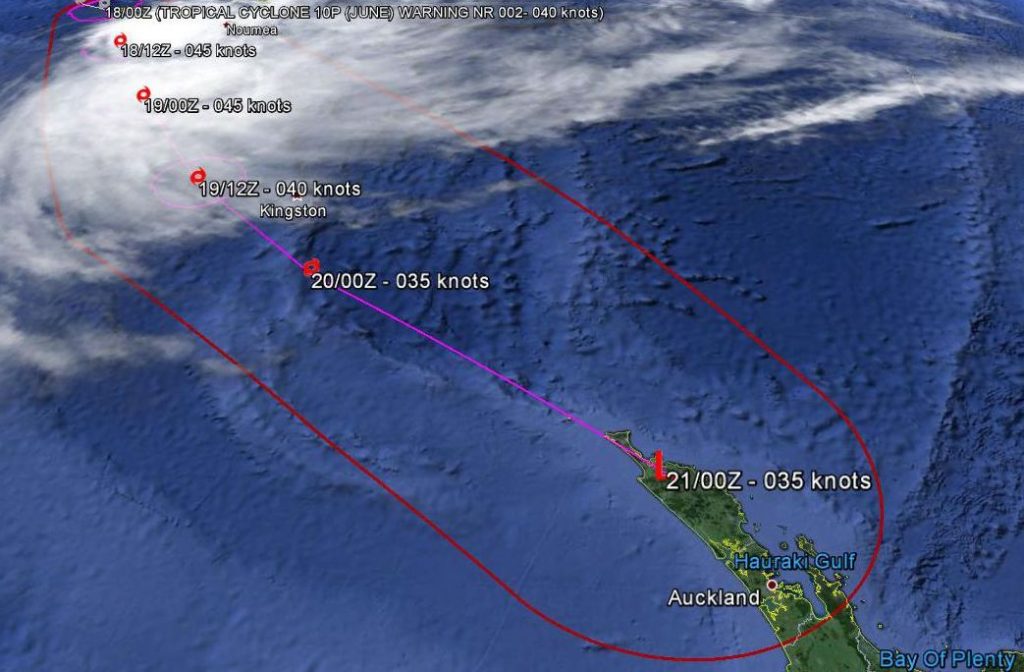 Updated: 5:41am — Ex-tropical cyclone June is currently passing to the southwest of Norfolk Island and is expected to continue moving in a southeast direction for the next 24 hours towards New Zealand.

“Damaging wind gusts to about 100 kilometres per hour are expected to continue on Norfolk Island for about the next 6 hours. These winds will ease later this morning as the system moves away to the south” says Australia’s Bureau of Meteorology.

“Damaging surf, which may lead to localised damage and coastal erosion, and abnormally high tides, which may cause sea water flooding of low lying areas, may occur along the foreshore today”.

June doesn’t look to be a major storm system for New Zealand which is the good news.  Severe weather looks to be in pockets across the country based on geography.  Please check the latest MetService severe weather watches and warnings for severe weather risks in your region this week.

As June quickly heads south the storm will be starved of one of it’s main ingredients – warm ocean waters to pass over – and like a punch to the stomach the storm will start to fall apart – which is why she lost her cyclone status on Sunday.

The remnants of June will then move into the upper North Island, however as the storm unravels the worst of the winds are likely to go off kilter and may well miss New Zealand. “Damaging winds are possible in New Zealand but they are more likely to be generated by the geography rather than just the storm by itself” says WeatherWatch.co.nz head weather analyst Philip Duncan.

“We expect June to continue to unwind as it heads towards New Zealand and will just bring pockets of severe weather to the North Island early this week”.

Since 2000 New Zealand has missed a number of tropical storms, but the most recent damaging one was Wilma in early 2011, which caused damage to parts of Northland and Coromandel especially.  A number have reached New Zealand but have fizzled just a few hours before reaching us.

June will not be as strong as Wilma was.

Campers and holidaymakers are advised to keep up to date with the latest weather news and maps here at WeatherWatch.co.nz and any MetService warnings – also to plan accordingly and ensure you’re aware of the natural hazard risks in your area. 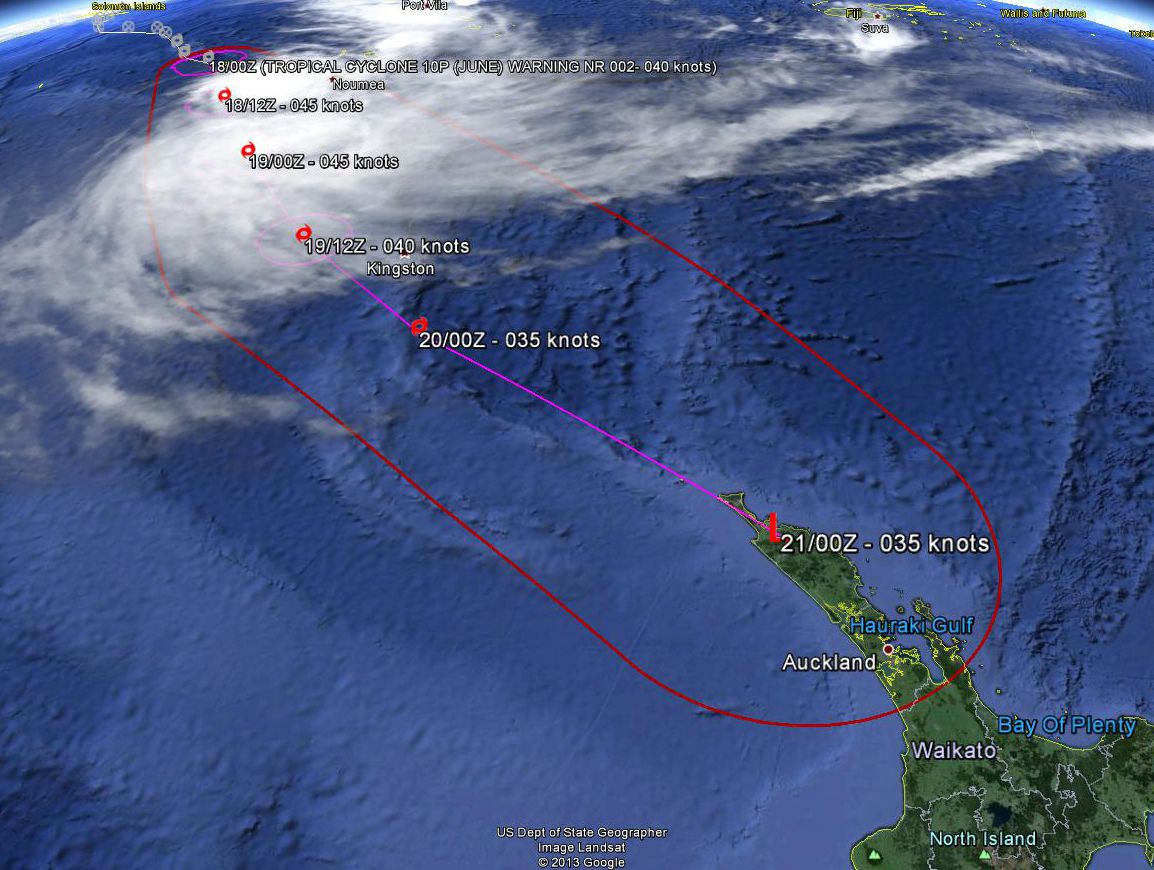 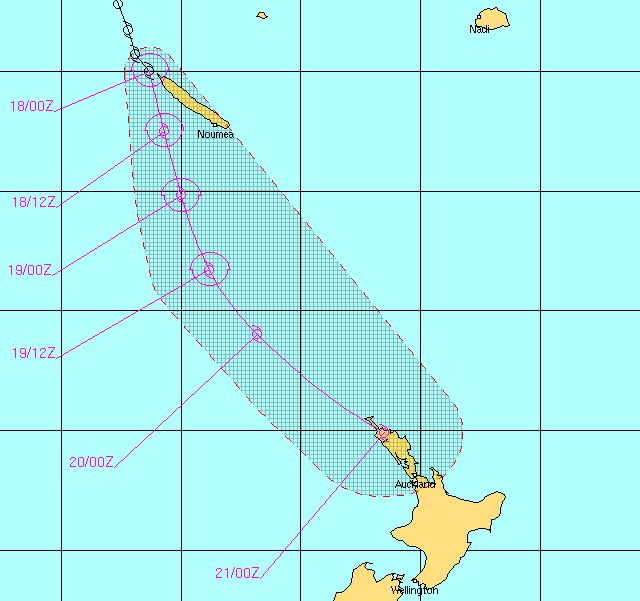 Great coverage of major events as usual WW, best updates in NZ and also very interesting to read the comments and diagnosis of such events from which one can learn a lot about these things.

Yes, another thank you for providing maps and updates on this.

Great updates WW. It is of concern that Stuff is blaming wind on this system before it has got here!

Absolutely agree Zelda – we always invite Stuff/Fairfax to call WeatherWatch for comment, or even just to double check things, but they often use government forecast sources instead.  We always ask the public to rely on the weather news stories on our website as they are mostly written by forecasters or journalists who run things by forecasters first.

Cheers – and thanks – updates are a bit slow today as there isn’t a lot of new info out there. Should get some new data this evening hopefully!

As these sysytems mostly lose their steam as they head out of the comfort ofd the warm/tropical waters, I bet the Lows that form out in the Southern Tasman smile as they are a different kettle of fish and just hammer on through and can be  much more of a threat than the lame beasts that come from the Tropics.

Evidence that “Beast” that hammered Wellington in June in comparison with those animals that rely on warmer waters for their energy.

The “Beasts” from the south are my prefference any day – much more predictable in their temperament, and much more fun I’d say.

In my recollection the only animals from the Tropics to give us a surprise were Giselle (Wahine) in 1968, and Bola in the early 1990’s.

March 7Th-11Th 1988 was when Cyclone Bola hit that was an absolute beast and the worst storm i have ever been in (Living in New Plymouth Then) we got evacuated Due to Roof almost being ripped off we lost about 20 Odd trees out the back and they were huge trees and u also u have 1990 cyclone hilda (Whanganui River hit hard) 1996 Fergus and 1997 Drena (Coromandel hammered) those are the worst ive experienced but Bola by far the most Viscious this sort of looks like the Satellite Pic that happened when Bola hit but we must remember that Bola stalled just off Northland for up to 3 Days b4 moving making it that much potent Cape Reinga was at the Centre of the Low for days but it was The East Coast and Taranaki that got hammered 3 days of severe Gales (Taranaki) and Persistant Torrential Heavy rain & Severe Gales (East Coast,Coromandel) but overall much of the North Island got hammered in some way

Cheers for the revision of past cyclones.

Actually, would WW mind doing an article on these past cyclones that have been mentioned by Kellythewildone?

I was just a kid during Bola.

I remember the excitement in the family about it coming and Dad being flat out shifting stock to higher ground and the concern we had of where to put my sisters horses.

I remember seeing this ominous looking cloud, and yet everything being so still and calm and my mother saying”Its the lull before the storm”.

Yet, I do not recall the storm itself being very fierce where we were.

It would be good to look back at these cyclones, the wind speeds, and the effect they had as a reminder of how bad these systems can get for little country.