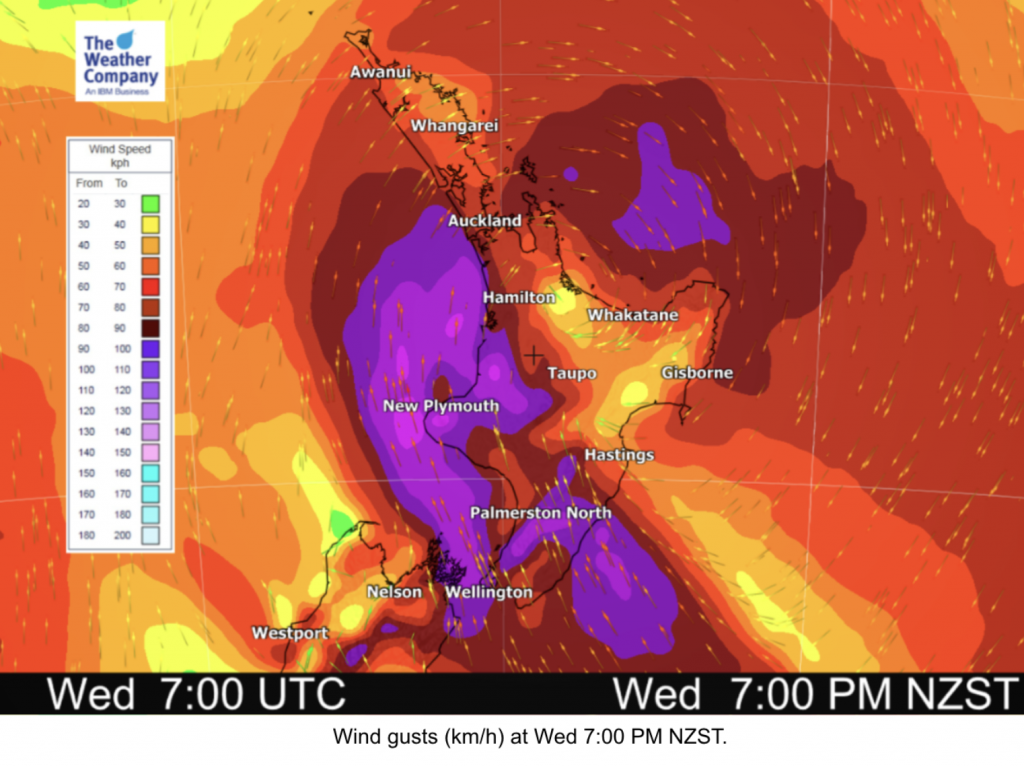 Ex-Cyclone Fili is likely to track directly over – or very close to – the North Island midway through this coming week, bringing with it severe wind and rain risks and dangerous marine conditions as the storm re-energises into a bigger low pressure system.

Latest computer modelling shows Fili’s centre moving more eastwards than in other updates in previous days. For those watching the models closely the GFS (American) model has been slowly sliding to align with the ECMWF (European) model for the past two days. The more these two giant weather models align the more confidence NZ forecasters have at being specific about areas most in harms way.

RAIN/FLOODING:
Heavy rain is once again forecast to hit the eastern side of the North Island, including similar areas recently hit by severe flooding. Totals are still being locked in and there is no warning in force yet, but latest IBM data exclusive to WeatherWatch.co.nz shows the potential for rainfall exceeding 200mm in some parts of Hawke’s Bay and Gisborne region. We’ll have a clearer idea on Monday about this.

Pockets of heavy rain are also possible elsewhere in the upper North Island, but there’s a fine line between mostly dry weather and Fili’s heavy rain risks, with most of the South Island looking significantly drier.

SEVERE GALES
The storm will move in on Tuesday or Wednesday with gales from the easterly quarter, which turn more southerly with a potentially damaging sting in the tail on Wednesday/Thursday as southerly quarter winds kick in from Cook Strait to Auckland and ramp up more as the storm now deepens.

The entire North Island has some risk of severe gales – the precise tracking of the centre of the storm will help forecasters lock in which areas will be most impacted by damaging winds and those details will start to emerge in the coming day or two.

OFFICIAL WARNINGS
All MetService warnings and watches can now be found LIVE here at WeatherWatch.co.nz and these will also start to appear in the coming 24 hours or so as Fili moves closer.

IMPACTS
There are likely to be slips, isolated flooding and road disruptions this coming week in the North Island. Power outages are also possible with winds strong enough to bring down trees and branches. Flights may also be delayed and cancelled along with Cook Strait ferry services. This storm, while quite fast moving, has the potential to cause disruptions to power and travel across parts of the North Island this week.

MAKE SENSE OF IT ALL WITH YOUR LOCAL FORECASTS
Sometimes all the opposing computer models and maps can be confusing. WeatherWatch.co.nz uses IBM data, which is the most accurate weather forecast data on earth. Our super computer “IBM Watson” crunches international and local data to help create the most likely forecast for your specific area. So if you need to keep up to date with wind gusts, rainfall, barometric pressure and more – for 10 days out – see the HOURLY forecast data at both WeatherWatch.co.nz and RuralWeather.co.nz.

NEXT UPDATE(S):
Monday morning by 7am in our Weather News Headlines update, then more specific information and maps will be published mid morning. Finally, our next weather video will also be published by lunchtime Monday.