Home > News > Every part of NZ below average tonight, ... 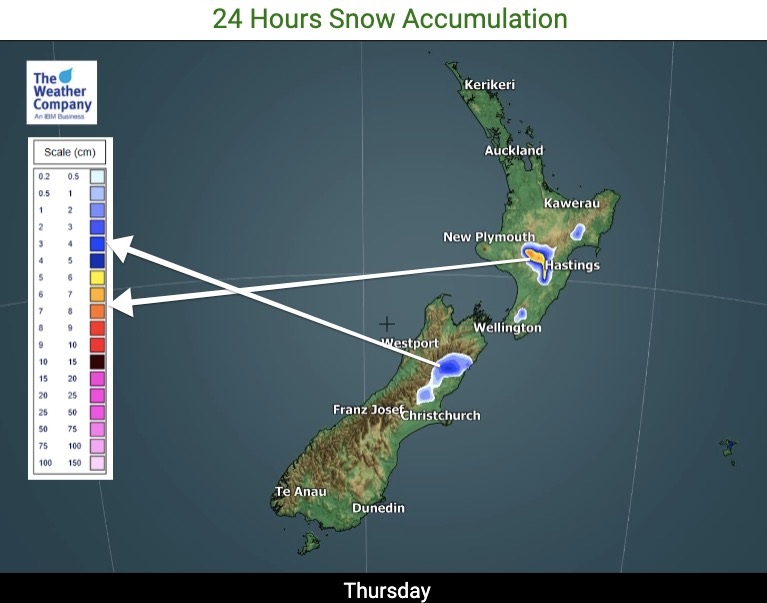 Traditional winter is here. Despite some quite dramatic news headlines the wintry period right now is typical for the country in July, although that doesn’t make it any easier to work in if you’re out in it!

Southerly gales continue to move up the eastern North Island today with Hawke’s Bay and Mahia Peninsula most exposed. While it’s another wet and cold one in the eastern North Island today, the worst of the snow will ease over the next 24 hours higher up. WeatherWatch.co.nz (the first to forecast snow for the Desert Road a week ago) says more snow flurries around State Highway 1 will continue in the Central Plateau today but should ease across the day with accumulations becoming lower.

In fact, temperatures today will be normal in over half of New Zealand despite the cold change. You can read more about today’s temperatures here: Temperature Trends – Cold in the east as southwesterly airflow bites for one more day.

Tonight the entire nation will be colder than average as this cold southerly air sinks and high pressure grows from the west, locking it in and bringing frosts across parts of New Zealand with lighter winds spreading.

Overnight tonight will be colder than last night/this morning was for most places, with Friday morning looking cold.

“We’re expecting widespread frosts overnight tonight and into Friday morning as all of NZ drops below normal temperature-wise, following this Southern Ocean southerly” says WeatherWatch.co.nz head forecaster Philip Duncan. “Frosty weather may even spread up around Auckland and Waikato, although some cloud cover may limit it – but overnight lows will close to zero in some areas of the north too, even without a frost”.

The brief calm, dry, spell will only last until the weekend, when then next nationwide cold front moves through.

By Saturday heavy snow returns to the South Island – great for the ski season, but there’s a twist for the North Island … subtropical winds return for a day. Meaning the same eastern areas today (Hawke’s Bay) dealing with wintry weather, will by Saturday be sunny and several degrees warmer, as will large parts of the South Island before the cold front arrives.

Such is life in New Zealand in July 🙂

Drill down further – with the largest weather data website on earth for your local part of New Zealand! www.RuralWeather.co.nz is worth a look!