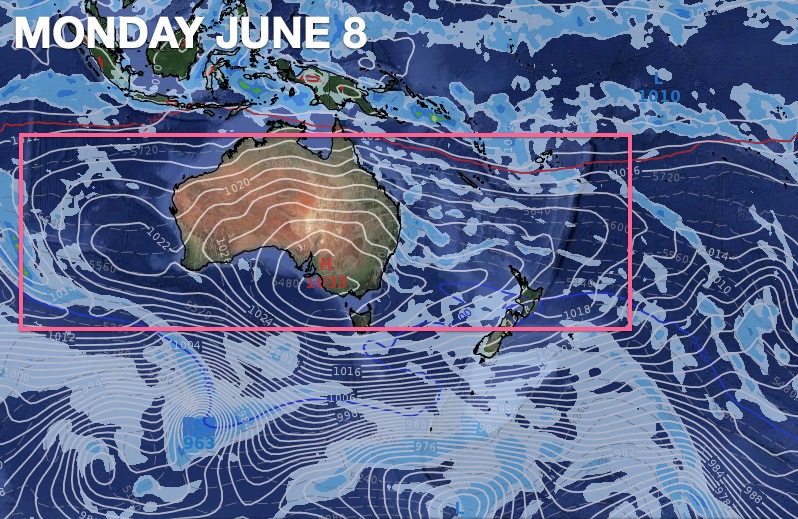 In the weather world we don’t say weather systems are ‘enormous’ very often – but this high pressure belt is. For a time next week it will roughly stretch 7000km across – to give some perspective Australia is almost 4000km from west to east and NZ is only 1600km from north to south.

The centre of this massive high pressure system will basically take all of next week to track from Adelaide to Sydney and over the Tasman Sea area, meaning New Zealand is in the cooler sou westerly flow for most of next week.

Put simply – next week leans drier than average in many places (with showers here and there) and cooler W to SW winds will be colder the further south you go.

Next weekend the high should cross NZ bringing lighter winds and a newly forming easterly flow for northerners.

But it’s the following week, 10 days from now, when this enormous high (and it’s enormous anticyclonic airflow) will start to depart east of NZ and this changes things.

As WeatherWatch.co.nz said in our recent June Climate Outlook, we expect rainfall levels to be closer to normal for northern NZ this month, that despite a drier than normal week on the way from tomorrow, Saturday, onwards.

We may see more evidence of this wetter weather as this high pressure system departs our shores pulling down northerlies from the sub-tropics into both islands and potentially sparking another rain maker for the north and west out in the Tasman Sea. It’s too far out to precisely lock in, but the maps below should help paint the picture in your head of the more likely scenario.

This is one big high with quite an interesting weather tale.

That High contracts a lot over 9 days doesn’t it?

From what I remember of CPL meteorology highs can block lows, but can that low (985mb) out to block the high?

Hi Christopher… highs tend to behave like human lungs, they expand and contract a lot as they move along. This also changes their shape which alters wind flows. Highs block lows because as a low tries to move into a high the low gets torn apart most often. As the high moves in around a low it basically tears the top of the low off at high altitudes and it ‘squashes it’. So normally highs win out (not always, but usually). It’s in the squash zone between the two which can often be windiest too. (neither high nor low!).
Cheers
Phil D