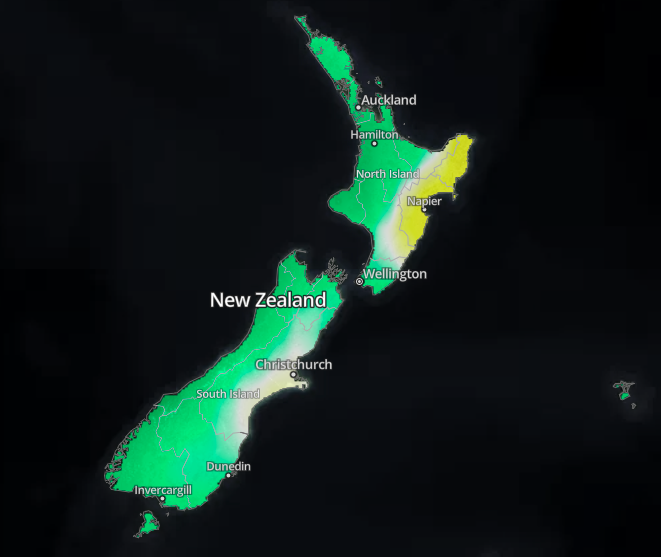 We’re officially in winter on the meteorological calendar and with June now here it’s time for an update on likely rain and temperatures.

As we hinted in our last ClimateWatch update early in May, WeatherWatch.co.nz and weather partner IBM hinted at more normal rainfall totals returning to northern and western parts of NZ. So far this has started to occur although by no means have droughts been fully reversed.

A text from a farmer over the weekend said his property between Whangarei and Auckland had 97mm last week then another 100mm on Saturday night, followed by over 60mm since. However a mate of his just 15km away got just 15mm and further to the west in Ruawai only 6mm. This “hit and miss” nature of rain has been a feature of 2020 which is why, once again, there will be pockets of drought lingering as we head into winter with more rain still needed – even if we do have some farmers and growers saying they have had enough rain now.

The theme that is showing up from both WeatherWatch.co.nz and IBM’s long range data (the most accurate long range weather forecast data on earth) is that more wet weather will be coming in to the NZ area despite a lot of high pressure still lingering over Australia. It’s a tug of war between wet and dry over the NZ and Tasman Sea area.

Generally speaking rain and shower events do look more frequent in the west, south and north of the country compared to previous months – allowing for some further hit and miss relief going into the depths of winter.

This set up will also encourge more dry weather in the east of both islands. For Canterbury this could mean conditions become even drier in the weeks ahead, possibly placing the region as the new top dry spot in the nation.

Drought zones in the upper North Island have now had plenty of showers and patchy rain events but droughts are likely to continue with a significant rainfall deficit still at play.

As we head into June we have a cold blast this week with more wet weather coming in to northern NZ but the coldness not lingering. High pressure returns for the first weekend of June and the cold snap quickly becomes a thing of the past.

Into week two of June and we may have a repeat performance of a very weak low in the upper North Island producing some localised wet weather here and there while high pressure dominates elsewhere. Further showers are likely going into June and with longer nights those showers – or the moisture they drop – won’t evaporate so fast.

FORECAST RAINFALL FOR THE MONTH OF JUNE (IBM)

RAINFALL FOR THE NEXT 15 DAYS:

NEXT 7 DAYS RAINFALL COMPARED TO NORMAL:

TEMPERATURES – MONTH OF JUNE:
IBM’s Watson Super Computer is the most accurate long range weather model on the planet and while there is always a 35% wiggle room with seasonal forecasting, especially in our part of the world, the general trend is for milder weather to continue – despite a short lived wintry snap in the first week of June. Overall, daytime highs should lean above normal many days this month. Nights will fluctuate more as high pressure belts tend to bring colder nights with clear skies and light winds allow the cold to sink – but the days can be mild and sunny for many too.

Hi Weatherwatch.
Would it be correct that there is a band of high pressure that stretches from Eastern Australia right through to South Africa, and then links another band of high pressure all the way to South America..??..
Is that an indicatator of coming weather? Is that band of high pressure “normal”, and will it be nudged northwards therefore avoiding northern NZ? However it would still impact on the dry weather for Aussie?
I would appreciate your comments.
Thanks, Phil C.

Hi Phil, yes there is a connection of high pressure that stretches the entire way around the globe at the same latitudes as NZ (or thereabouts) with a few lows in between. So we usually look left (west) to see what is coming our way in the weeks ahead. High pressure belts like this normal but perhaps what is abnormal is just how interconnected and persistent they have been for over 12 months now. It’s like there is a thin invisible wall over Aussie and NZ which limits tropical rains from heading south and limits Southern Ocean storms from heading north – keeping NZ much more settled than usual for now (even with the odd rough patch every now and then, like later this week with the cold southerly).
Cheers
Phil D