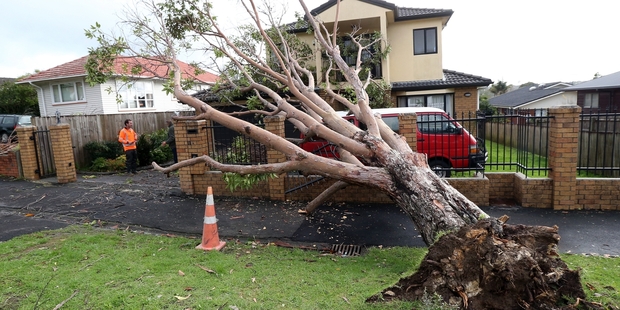 Stormy weather pelting the country with heavy rain and wild winds is not expected to ease until tomorrow.

Thousands of Aucklanders caught in the high winds, which reached up to 145km/h on the Whangaparaoa Peninsula, were still in the dark last night, and slips in Gisborne, Hawkes Bay and the Bay of Plenty were causing problems for motorists.

A large slip has blocked part of State Highway 29 across the Kaimai Ranges.

The slip is located about half way to the summit on the Matamata side of the ranges.

All lanes are reported to be blocked by mud and vegetation to a depth of about 1.5 metres.

Drivers are being urged to avoid the highway until contractors can clear the slip.

Power off still off in some areas

Overnight, electricity was restored to thousands of homes in Tauranga, South Waikato and Coromandel, with around 6000 properties still without power this morning, Powerco said.

“Our first priority is making the network safe. Stay away from any downed power lines and call Powerco’s emergency number 0800 272727.”

Mr Stevenson said most of the damage had been caused by trees falling across lines.

“These power cuts could have been avoided if the trees had been trimmed or felled to avoid problems.

“In Auckland a further 5700 customer had their power restored on Vector’s northern network, bringing the number without electricity to 4000.

“Crews worked throughout the night and efforts will redouble at first light to clean up the remaining areas without power,” Vector said.

“Some of the outages are reasonably complex with several spans of lines being damaged by debris.”

Crews are working as hard as possible to restore power and Vector appreciates your patience.”

At the height of the storm more than 90,000 customers were without power, the company said.

Forecasters said the wild weather, which brought down trees, caused flooding and damaged properties around the country, had left behind a rain band over the East Coast of the North Island. This would weaken and shift north tomorrow.

More than 700 people had contacted their insurers about storm-related repairs yesterday afternoon.

Before 3pm, IAG New Zealand had had more than 600 claims from customers insured with AMI and State.

The head of corporate affairs for IAG, Craig Dowling, said half the claims were from Auckland and Northland. About 300 claims from the Coromandel Peninsula, Bay of Plenty and the Waikato coast had also come in, he said.

Most of those claims were for wind-related damage, with some reports of flooding, he said. “We also received some claims for flooding made in North Canterbury, with some properties significantly impacted.

“Extra staff were called in to cope with the increase of claims, and many were working overtime.”

Additional assessors, tradesmen, and flood and drying experts had been brought in after the storm.

More than 100 insurance claims had been lodged with AA Insurance for damage to roofs, windows and fences. The company urged people to make claims from the heavy rain and gale-force winds as soon as possible.

Most claims were from Auckland, with a few relating to Tuesday’s flooding in Canterbury. Further claims were expected as severe weather warnings remained in place for the east of the North Island, including Gisborne and Hawkes Bay.

AA Insurance head of customer relations Suzanne Wolton said it was too early to estimate the cost of damage.

Bay of Plenty Civil Defence emergency management group controller Clinton Naude said his team had received reports of surface flooding and some power outages, but had not seen cause to activate the local Civil Defence Operations Centre.

Gisborne Civil Defence controller Peter Higgs said with about a dozen roads closed in the district last night and a major slip at Devil’s Elbow south of Wairoa, motorists should check road conditions before driving.

The Hikuwai River north of Tolaga Bay was expected to reach 10m last night. Evacuations were likely when the river reached 12m.

The Gisborne Civil Defence emergency management team was also keeping a close eye on the Waimata River in the city.

Meanwhile, 9600 customers in Auckland were still without power at 9.30pm last night, down from the 40,000 earlier in the day, lines company Vector said.

One house in Whitianga was blown apart in winds the town’s fire chief said were the worst he’d ever encountered.

Merv George said a woman was given “one hell of a scare” when the roof of her Wharekaho Rd home was blown off and the front of the home blown in shortly after 3am.

The home, which Mr George said was like a converted garage, had been damaged so badly he doubted it could be saved.

The woman was unhurt but was forced to take refuge with neighbours.

“I’ve never seen wind like it before – you couldn’t walk against it at times,” said Mr George, a long-time Whitianga resident.

In another case, a street had to be closed because of flying 6m pieces of roof iron, some of which were found wrapped around trees.

One of Mr George’s fire crew earned the nickname “tumbleweed” after he was knocked from his feet and bowled along the street while trying to collect the helmet that had blown off his head.

Between 2am and 8.30am, his crew attended 15 callouts. “The boys and girls worked really hard.”

Two brothers had a narrow escape after a tree crashed down just centimetres from their bedroom.

Just after 3.30am two large pines fell on a home in Blockhouse Bay, causing extensive damage.

“One took out the garage and my car,” said the boys’ mother, Sarah Thompson, 34. “The other one smashed on the top of the roof and just narrowly missed my kids’ bedrooms by a few centimetres.”

Ms Thompson feels very lucky her sons, aged 7 and 9, were not hurt.

She said she had stayed up all night because of the wild winds, and heard the trees crash. “I heard the first crack just after 3, and a couple more cracks and then a big smash.”

Her sons were initially “freaked out” but as day broke they were overcome with a spirit of adventure.

“They were excitedly walking around the property looking at all the damage, and they thought it was pretty cool, because they’d have some stories to write about at school.”

The main structure of the house was undamaged, and contractors were working to remove the trees.

Dennis Hawnt of Whangaparaoa woke to find a large tree had crashed through his garage and sleepout.

Mr Hawnt said he woke just after midnight and found that power in his Arkles Bay home was off.

“I went outside and saw the tree had fallen on the garage and the sleepout, but it was good because nobody was in the building at the time.”

A local fire brigade was in the area and came to assess the damages.

“It’s quite lucky that it didn’t land in a more inconvenient place, like on one of the cars or on the house.”

Mr Hawnt said he would seek advice from his insurance company before removing the tree.

When Brenda Sweeney heard a bang outside as she lay in bed, she didn’t think to check the swimming pool.

It wasn’t until she got up the next morning and a neighbour on Mairangi Bay’s East Coast Rd asked her if she had checked her backyard that she realised her trampoline had jumped into her 6m swimming pool (pictured above).

The grandmother checked her fence when she was woken by the noise about 2.30am yesterday, but went back to sleep when she saw it was still standing.

“I didn’t even think to check the pool … nothing else could have fitted into it, the trampoline took up all the room.” She asked a builder if he would come and take it out but was told he may not be able to arrive for up to two weeks. She tried fire stations on the North Shore but they were too busy with other callouts. One told her to call the northern fire communications centre, which organises the region’s callouts.

“Within two minutes, three burly firefighters arrived to help,” Ms Sweeney said. “From now on, I will buy a Fire Service calendar every year.”

A water tank was all that stood between a falling gum tree and a mother and daughter on the Whangaparaoa Peninsula.

Robyn Whittaker and her daughter were sleeping in their bedroom when a 15m tree crashed on to the roof of their Manly home just before 2am.

“We just heard an almighty noise and basically a big gum tree had come from the property just up on the hill … straight down – and on to our house,” Ms Whittaker said.

“I was in the bed right under it with my young daughter because she’d got up because of the noise of the storm.”

Had the tree not first crashed into the water tank behind their house, it might have come straight through into their bedroom, she said.

“It was a huge tree; enormous, and very heavy,” she said. “So the water tank stopped all the weight from coming down on to the house.”

Most of the tree is now off the house, but the roof and water system were extensively damaged.

Just 200m up the road, a 14-year-old was taken to hospital with minor injuries yesterday morning after another gum tree crashed through the roof of a house.