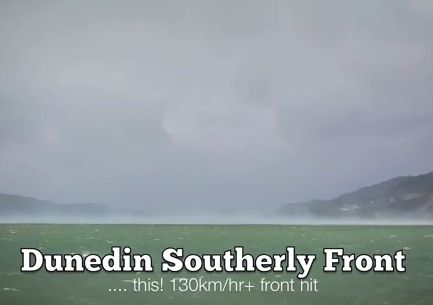 The first of the two predicted cold snaps this weekend has arrived, bringing a burst of wind up to hurricane force and a dramatic hack back in temperatures in the southern city of Dunedin.

In less than 7 minutes the temperature dropped from 15 degrees to 5 degrees as the gale sou’west change blew in on Saturday afternoon.

Gusts reached 120 to 135km/h into the hurricane force (or severe gale) range.

Reports of powerlines down on cars and minor damage have come in to WeatherWatch.co.nz.

The change was sudden – giving some people a fright as the burst of damaging winds, hail and cold rain blew in.

And then it started to ease.

Conditions are still strong to gale force with just 5 degrees in Dunedin. This cold front will head north but isn’t likely to be as strong further north. Snow may lower to 200 metres this evening in Southland and Otago.

On Sunday a colder and windier change will cross the South Island and lower North Island bringing heavy snow to the Deep South and a burst of damaging gales, possibly up to 150km/h in some exposed areas along the east and south of both islands.

Video thanks to Paul Le Comte

Played rugby in palmy north sat arvo. It got so dark so quickly that the lights had to be turned on so we could finish. It was dark as night by 4:30

That was like in Palmy today (Sat). It was light at 4-420ish and within minutes, low dark clouds rolled on through and shortened our afternoon. By 435ish, we had driving rain and the wind was insane!