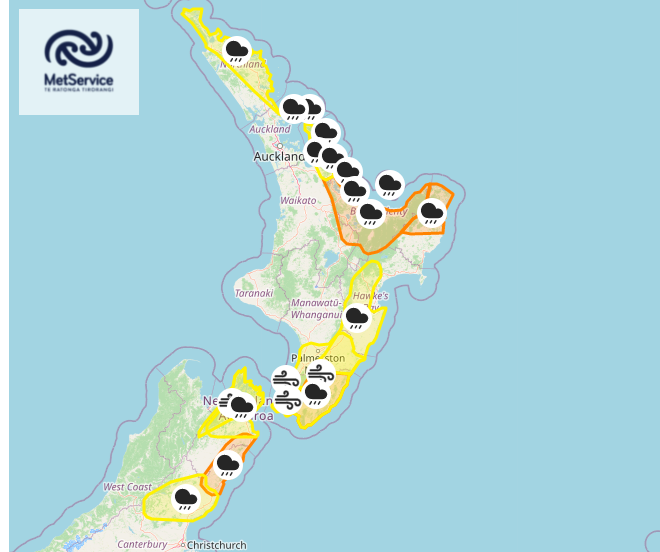 A band of heavy rain this morning that moved out of Northland has brought mid-winter warmth and a tornado to Auckland that has caused damage in Wiri. It’s possible there was more than one tornado, or squall line, as this front moved southwards this morning.

Auckland news outlets are reporting the death of a person at Ports of Auckland in Wiri following shipping containers toppling over this morning. [this story has been updated, we incorrectly said in an earlier update there was damage in the CBD].

Low pressure is creating the unstable weather and while most thunderstorms were offshore from the city the tornado is inline with the very mild weather mixing with cold conditions of winter and low air pressure moving in.

Instability, heavy downpours and thunderstorms are possible for the rest of Saturday and Sunday too in parts of the North Island – but again, they will be isolated.

WeatherWatch.co.nz head forecaster Philip Duncan says it’s hard to precisely forecast an event like this. “Tornados are incredibly localised and can come with little to no warning in New Zealand, especially in Auckland with so much coastal influence”. Mr Duncan says while damaging tornados are quite rare, this was the third deadly tornado to hit Auckland in a decade.

In May 2011 in Albany one person was killed following a tornado and a year later in 2012 in Hobsonville three workers were killed when a freak thunderstorm and tornado damaged a construction site they were on.

You can view all current MetService watches and warnings here.

i seen a vid of this tornado and it was massive. proof that nz does get big tornadoes even though they are weak and short lived they can still be dangourous. what was t6he rating of this one?

Hi Josh, without actually being there our guess was that it was EF1, potentially EF2.
Cheers
WW