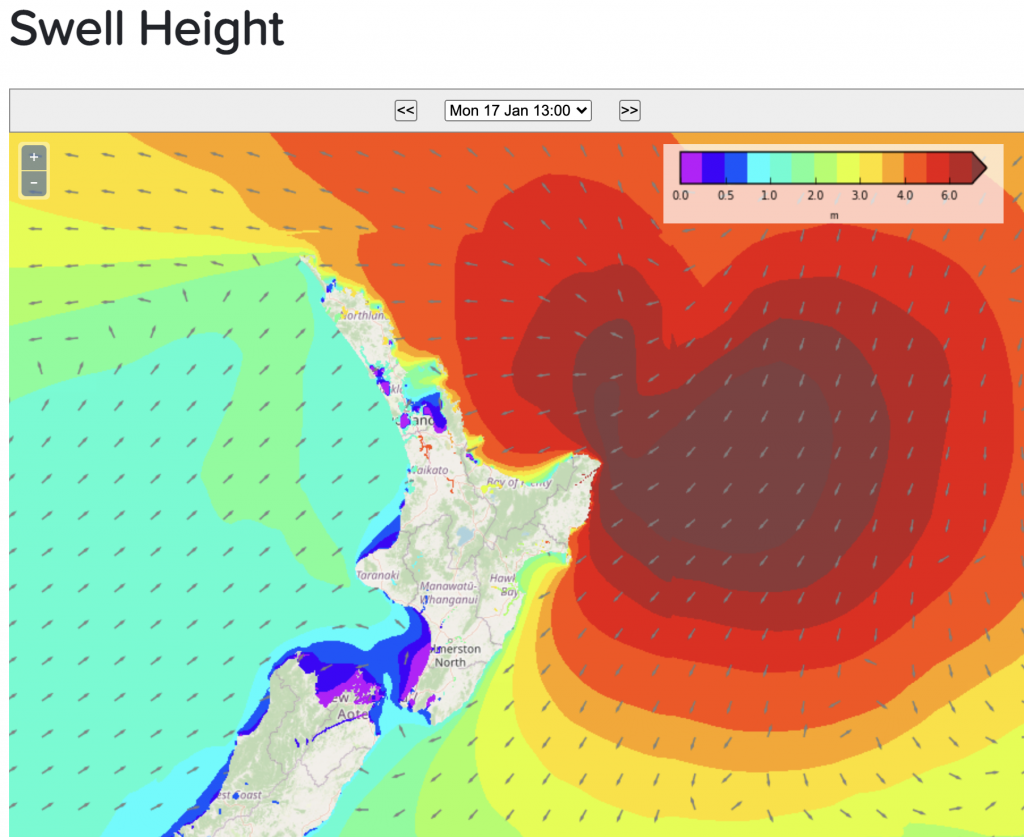 Cody remains a serious storm but latest tracking to the east reduces the risks to more parts of the North Island, says WeatherWatch.co.nz.

“As we’ve been saying all week, NZ is shaped north to south and Cody is tracking north to south – so any movement Cody makes to the west or to the east will have significant consequences as to who is affected and how badly impacted” says head forecaster Philip Duncan. “For 48 hours now we’ve seen the modelling and data shift the worst of Cody further to the east, which is positive for many people – but not for all, as the rain was really needed by many”.

Mr Duncan says with Cody’s rain expected to miss a larger portion of NZ it will likely shift the January outlook to “drier than average” for places that were hoping for a wet La Nina summer – something WeatherWatch.co.nz exclusively mentioned in our ClimateWatch January Outlook. “This tropical low was a good chance for getting rain into dry areas, but like we saw with La Nina 12 months ago, it doesn’t always equal wet weather here in New Zealand”.

Despite Cody’s track further east, severe weather – and severe beach conditions – are still expected. In fact, it’s the coastal portion of Cody that is most severe, dangerous and widespread for New Zealanders in the coming days.

WIND & RAIN:
Cody is most likely to impact East Cape, Gisborne and Hawke’s Bay and those close to the boundaries of those regions. Rain totals around Gisborne are still high enough to cause localised slips and flooding.

It’s worth noting that while Cody may track even further east still, and again reduce rainfall totals, it may also jog back westwards a little – and that could see heavy rain spread further back into the North Island. It remains ‘one to watch’ and MetService has already issued a Severe Wind and Rain Watch for Gisborne and northern Hawke’s Bay – which you can find live here.

DANGEROUS BEACHES
Perhaps more impactful than the weather from Cody will be the dangerous beach conditions. Cody’s big waves and dangerous rips and currents won’t just impact the North Island – they will reach right down into Canterbury and even Otago beaches. East Cape and Gisborne area will be most impacted on Monday with wave heights in excess of 8 metres possible. This is significant and could cause serious coastal erosion. It’s a highly dangerous set up and poses more of a threat to people over a much greater distance along the eastern beaches of NZ than the storm will bring weather-wise to NZ.

This means the weather at your local beach may be sunny, calm and hot – but offshore Cody (which isn’t a fizzer, it’s still very much a major storm) will be churning up the currents and rips and bringing in bigger sets of waves. Extreme caution is required at most eastern beaches over the next three or four days as Cody churns past NZ to the east.

Happy New Year WW!
Excellent coverage Phil & the WW team. Watching the future tracking of Storm Cody shows it going very close to the Chathams so it’ll be a bit of an event for them!!
Keep up the great work guys!
Gary

Hi Peter. The low is pressing into a balloon of high pressure over the South Island, but the high is not entirely inflated. The high is helping cushion the low. The low acts like a river going down a valley, it looks for the path of least resistance so it skirts around powerful high pressure zones, but can push through/into weaker areas of high pressure. (that often weakens the low too). These are the many moving parts forecasters monitor to work out where the precise centre of a storm will track – and explains why if a high grows a bit more, it can shift the tracking of the storm…just like the ground lifting up, or a slip into a river, would alter the course of that river.
Phil D