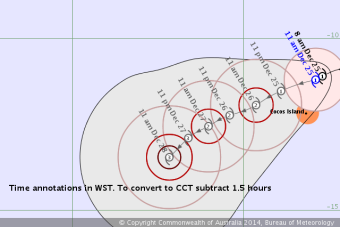 The Cocos Islands have been buffeted by strong winds as Tropical Cyclone Kate passes north of the tiny community more than 2,000 kilometres off the West Australian coast.

The Bureau of Meteorology said the tropical cyclone reached category one intensity as it passed north of the remote Indian Ocean territories, which are home to about 600 people.

The bureau warned destructive wind gusts up to 100 kilometres an hour were possible.

The cyclone was 45 kilometres north north-east of Cocos at 5:00pm (WAST), with wind gusts already reaching up to 102km an hour. It has been moving west at 12km per hour.

Heavy rain and flooding is expected.

Ahead of the cyclone, Cocos Islands resident Amber Watters told the ABC that locals were tying down loose items in preparation.

“We’ve been out preparing our yards, stowing away goods, making sure our neighbours who are on Christmas holidays properties are looked after,” she said.

“Just a general tidy-up in accordance with the cyclone protocols which we’re very familiar with.

“When preparing you need to prepare an emergency kit, so your essential items, change of clothes, medications … you have that ready to go with torches and your battery-powered radio, where we listen to the local radio station, because they do the emergency broadcasting and let us know where the situation is at.

“Tinnies get filled with water and tied down, just general preparations to make sure there’s no unnecessary airborne missiles that might be a danger to people’s properties or lives.”

“Normally we have a community Christmas lunch at Trannies Beach, which is the swimming beach, and everyone in the community goes down there and takes a plate and we all share Christmas lunch together as a community, and that wasn’t able to happen” Ms Watters said.

Communities on Home and West Island have been urged to listen for the bureau’s next advice.