Home > News > ClimateWatch: Not your normal MAY on the...

ClimateWatch: Not your normal MAY on the way (+15 Maps & Video) 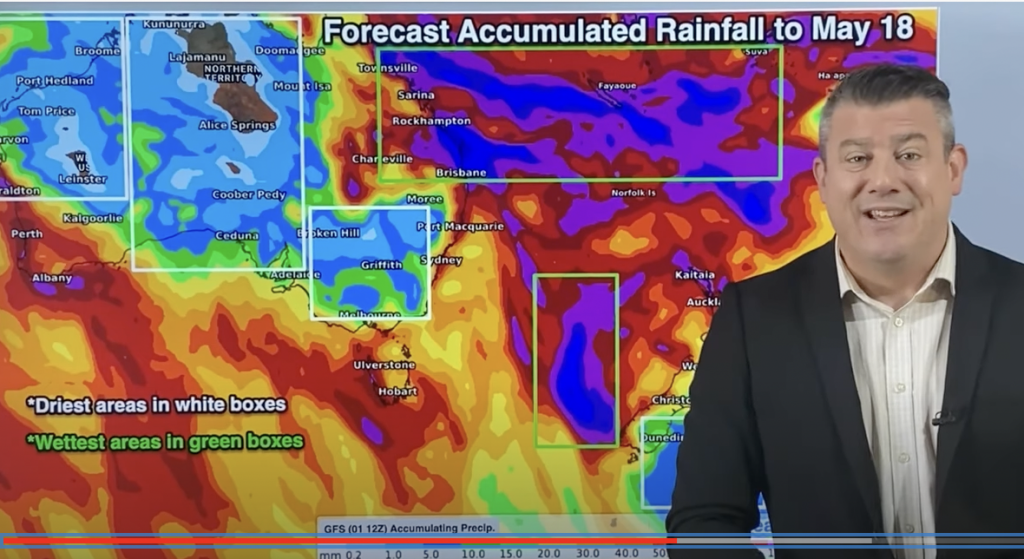 We take a look at May and the June/July portion of Winter in our latest ClimateWatch update, as La Niña continues to just hold on. Like trying to move a cat from a bed but it’s claws are stuck in the blanket, La Niña is clawing on to the western Pacific …but only just.

Sea surface temperatures are returning closer to normal up near the equator where La Nina is measured – but atmospheric conditions continue to see La Niña weather coming to life (albeit in a shrunken version to where we were back in March).

In the NZ area sea surface temperatures and regional Marine heatwaves carry on – this added ocean warmth in the local NZ area will act like a luke-warm hot water bottle in our neck of the woods, meaning NZ has a little extra heat energy in our reserves as we go into winter, so it’s no surprise May (along with June and July) look to lean 0.7 to 1 degree C above normal for New Zealand.

Not your normal May
This is summed up by high pressure. Much more high pressure than usual in the NZ area (and Aussie too), which can encourage cooler nights but usually milder days. The net gain for NZ is that we’ll be warmer than average overall. On the last day of April WeatherWatch.co.nz staff travelled the length of NZ (Auckland to Southland) and NZ’s mountains, despite being a few weeks from winter, remain snow-free and baron in many parts of both main islands. This is due to so much high pressure this year, along with milder conditions, which looks set to carry on. Many regions in both main islands also have pasture that looks browner rather than greener, at least for this time of year.

La Niña Wild Card
One positive about La Niña is that it can send NZ random low pressure zones. Later this month low pressure might enter the Tasman Sea region and give NZ better chances for rain. But this is not the main day-to-day theme of May’s weather – it’s a possible silver lining for those who need much more wet weather.

Long Term into Winter
Winter looks as though a more normal pattern may come in – especially if La Niña does fade further. But the lower South Island may still lean drier than average, which is not the news Southland wants to hear. The region, which is currently in drought, had good and healthy rainfall totals in April following a bone dry start to 2022. But May and beyond look to see a return to much more dry weather lingering in Southland and Otago (and Fiordland may be driest of all, compared to average). For farmers this set up may encourage a further ‘green drought’. Green droughts may also be more talked about in the North Island in the weeks ahead if any last minute La Niña rains fail to arrive.

The upper North Island is now entering it’s fifth consecutive year with below normal rainfall, so the news of normal rainfall perhaps returning once we get to winter will likely be a big focus of our next ClimateWatch update for June and Winter, which will be released at the end of this month (May 31).

What BoM says about La Nina (Bureau of Meteorology)

ClimateWatch is a monthly public service – brought to you in association with RuralWeather.co.nz and our business partners at IBM.

Maybe he was saying Southland is full of lower order English nobility too?