Canterbury clean up ‘will take weeks’ 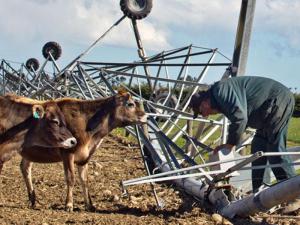 The clean up in rural Canterbury following the record-breaking storm will be more complicated than originally thought, according to one farming field officer.

Scores of power lines were felled by Tuesday’s gale force winds, leaving many farms without power, and cellphone reception patchy at best.

This mean communication between rural residents and those trying to help is more difficult, and Field officers like Federated Farmers’ Pam Boland says this is the most pressing issue to address.

Pam Boland says the offers of assistance have been overwhelming after the call went out for generators, but more is needed in some areas.

Irrigation New Zealand is another worried party – facing the prospect of helping members assess damage to an estimated 800 irrigators blown over by the storm, while around 7000 Christchurch residents are still without power.

CEO Andrew Curtis says it could be weeks before they can get enough expertise and equipment together to address the problem, and farmers will have their fingers crossed for a wet Spring.

Andrew Curtis says even though farmers had plenty of warning about the high winds, some of the measures they took to protect equipment backfired.

I like the image showing the cows encouraging the worker 🙂