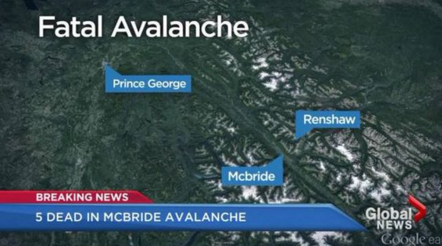 Two groups of snowmobilers were involved, Cuzma said. A search team rescued six survivors from one of the groups.

Karl Klassen, the warning service manager at Avalanche Canada, a nongovernmental organization, said the group received a report of “what appears to be a very large, significant avalanche event,” and knows it was human-triggered.

“Fairly significant weather event added rain and snow to the snowpack over the last few days followed by clearing and cooling today,” Klassen said. “This may have produced stresses in the snowpack capable of producing large avalanches and this condition could take several days to settle and bond.”

McBride is about 470 miles from Vancouver.