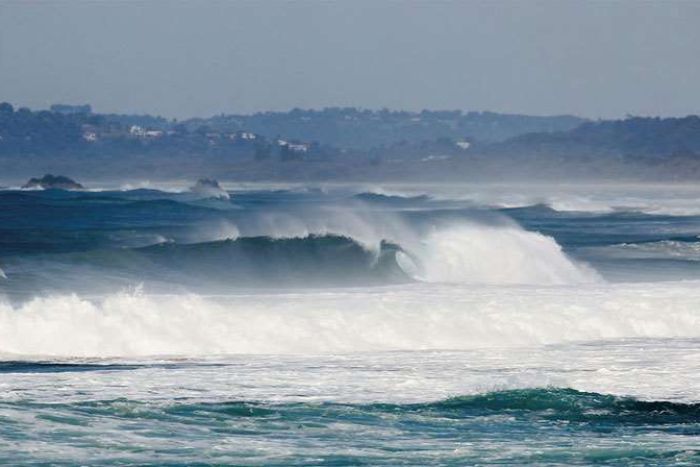 Large, messy swells are lashing Queensland’s south, closing dozens of beaches on Saturday and Sunday as ex-Tropical Cyclone Winston tracks off the coast.

The system is about 660 kilometres north-east of Brisbane, producing dangerous surf up to 4 metres high.

A body boarder was reported missing by two children just south of Tallebudgera, however Gold Coast City lifesaver Ken Lloyd said the search had been called off.

“They watched a young bodyboarder paddle out and they lost sight of him,” he said.

“They alerted the lifesaver and we conducted a helicopter search.”

Mr Lloyd said because the chopper did not find anyone in the surf, the search had been stood down until there was a missing person report filed.

Combined with a south-easterly wind, surf conditions have been declared dangerous by the Bureau of Meteorology (BoM) and lifesavers.

Furthermore, exposed beaches on the Gold Coast, Sunshine Coast as well as Stradbroke and Moreton Islands will endure their highest tides this year on Saturday and possibly Sunday morning.

All of the Gold Coast’s 41 beaches are closed, and will be closed on Sunday as well, Surf Life Saving Queensland said.

“It is messy and the swell is meant to pick up as the day goes on,” he said.

“With that incoming tide, there will be no beach to lie or walk on. All beaches will be closed and people should heed the warnings.”

On the Sunshine Coast, all open beaches are closed, except Coolum and Noosa.

Lifeguard Dave McLean said the waves were about 2.5 metres, with many shore dumping.

“Surfers will be heading to Noosa,” he said.

“It will be very crowded up there and services will be extended for that population explosion.

“Stay out of the water.”

“We could have some waves much larger than that but kind of an average is up to 4 metres today offshore,” he said.

BoM said the system was expected to remain offshore and track north-westwards until Sunday morning, when it is due to weaken.

“It will retain an intense wind structure through the next 12 to 18 hours,” a spokesperson said.