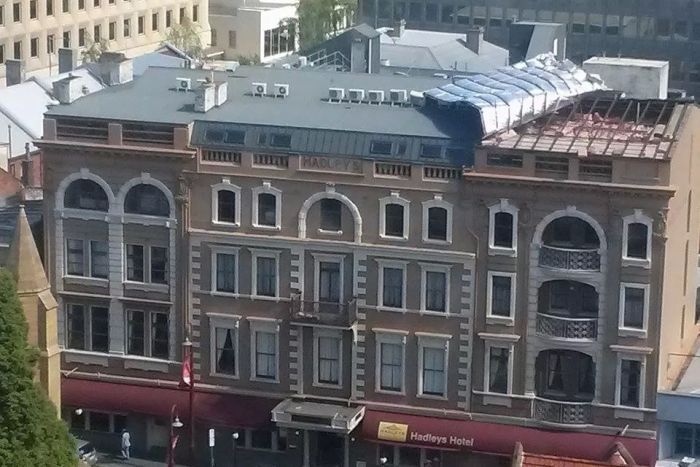 A historic Hobart hotel has had part of its roof torn off by high winds as the city is buffeted by severe weather.

A large section of the roof of Hadley’s Hotel was torn off this afternoon exposing the insulation, as the weather bureau warned Tasmanians to brace for strong winds across the state.

Hotel Manager John Lister said it felt like the approach of a mini tornado.

“It’s just sort of lifted up the top part of the roof,” he said.

Rachel McInerney from the bureau said a low-pressure system was passing through the state’s south.

“The areas that will be most affected – western, central, southern and across the east coast,” she said.

It is believed Bruny Island, Flinders Island and the Tasman Peninsula would be hardest hit with areas above 600 meters expecting snow.

A storm-force warning has been issued for lower, eastern and southern coastal waters, and a gale warning for remaining waters with winds expected to ease later tonight.

The SES took 11 calls for help in the south and one in the north, mostly to do with roof damage and tree limbs down.

Power crews were working to restore power to thousands of homes after power lines were brought down.

Tracey Gatehouse from TasNetworks said their repair crews were doing what they could.

“We’ve got all available crews out working at the moment so we’re restoring as soon as possible but there may be some long delays,” she said.

“The best thing for customers to do is to check out website.”

Hobart’s first cruise ship of the season has had to abandon its visit due to bad weather.

The Oosterdam was due to arrive this morning from Melbourne but has gone straight on to New Zealand instead.

He said the cancelled visit would cost the city’s businesses thousands.

“Many of them do tours and, you know, cups of coffee and having a bite to eat onshore.

The Oosterdam is scheduled to be back in Hobart in November.