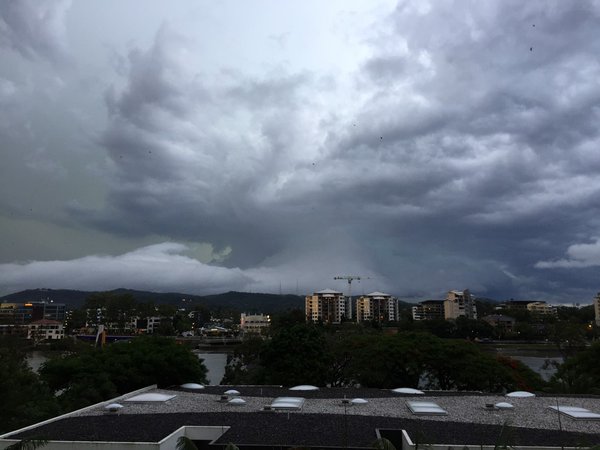 More than a dozen homes have lost their roofs and close to 19,000 properties were left without power after very dangerous thunderstorms tore across south-east Queensland on Sunday afternoon.

The storms, which began out west in the afternoon before moving towards the coast in the early evening, dropped golf ball to egg-sized hail in the Brisbane suburbs of Rocklea, Acacia Ridge, Archerfield and Corinda, and more than 72 millimetres of rain in 30 minutes at Harrisville in the Scenic Rim.

OH MY GOD!! The storm here in Brisbane is AMAZING!!! pic.twitter.com/eAZTS7R7DU

The Bureau of Meteorology cancelled its severe thunderstorm warning for the south-east about 8:00pm Ã¢?? an hour after a second storm cell passed over the Brisbane CBD and surrounding regions.

In Warwick, west of the Gold Coast, the storms tore the roofs off more than a dozen houses.

Warwick Police Constable Ian Buckmaster said the storm was accompanied by wind gusts of more than 125 kilometres per hour.

“We have had lots of trees down across roads and powerlines ripped down as well,” he said.

“These trees were planted by work gangs during the Great Depression in 1932,” he said on social media.