Australia: Watch the bizarre cloud formation that had Victorians scratching their heads (VIDEO) 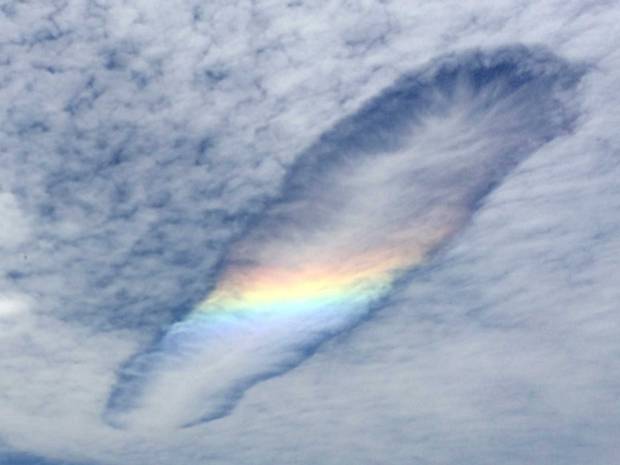 It looks like a passage into another dimension, or an alien space ship hovering just out of vision. And the people of Twitter want answers.

Photos of the cloud â€“ which looks like a massive, ethereal, rainbow-filled hole splitting up a stormy sky â€“ emerged just before 1pm on Monday after a listener called into radio station 3AW.

Another user wanted to know if the world had reached its end: “Rapture’s here, folks. Some weird rainbow/ cloud action going on in Wonthaggi right now,” he said, tweeting another picture.

But the Bureau of Meteorology’s duty forecaster, Michael Efron, wasn’t too worried.

“It looks like a fallstreak cloud, also known as a punch hole cloud,” he told Fairfax Media.

“They form when the water temperature in the cloud is below freezing, but the water has not yet frozen due to a lack of ice nucleation particles.

“In this case, when the water does start to freeze, it falls down to the surface … so you’re left with this cloud surrounding it, this clear area.”

The rainbow inside the cloud is called “iridescence”, Mr Efron said, which most often occurs in soap bubbles, butterfly wings and sea shells.

“This type of [cloud] iridescence occurs with high level cloud and with diffraction, [meaning] that water droplets are gathering light,” Mr Efron said.

The type of effect does not occur in all clouds, which are made of condensed water vapour, he said.

Although the bureau does not keep records of the how often this cloud formation occurs, Mr Efron said a similar cloud emerged in Perth last month, shaped like a watery UFO.

The fallstreak cloud can be triggered by aircraft flying through the area, and can “persist as long as we’ve got high cloud around”, Mt Efron said.

It reminds me of the shape of the ark ruins, and the rainbow is on target with the sign given Noah. The ark represents Christ and this could be a sign of the revelation of Christ being released over the area.